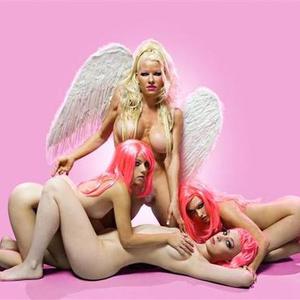 Erocktica's foundation lies in the fundamental right of freedom of expression, intolerance of censorship, the abhorrence of socially ascribed norms of complacency, and rejects the societal dictated molds of how individuals should choose to live their lives - having to censor their means of self expression. Through out history, people, including many artists, have been condemned for their ideas. The free flow of ideas is our inherent right in a democracy, and necessary for the advancement of thought, culture, and society.

2009 brings Erocktica to a new level in rock n roll history! As seen worldwide on Playboy TV's Sexcetera, and featured in the December 2007 Penthouse Forum on women in music, Erocktica continues to bring sex and rock n roll to the world in one unholy marriage with their latest album Second Cuming... The band's second album comes packed with a heavier guitar edge and fierce pounding drums, and a darker side of the glory of sex and rock n roll in one album. The quintessential porn rock band with the ultimate hard rock album. Sensuous vocals and great hooks keep this album rocking from start to finish. Wendy O Williams, Dale Bozzio, and Jessica Rabbit meet Motley Crue, Guns n Roses, and AC DC. You wanted the BEST, you got the BEST, so come on in and step inside the world of Erocktica.

Building of a Supergroup

Formerly known as Porn Rock in the United States and Erocktica in Europe, the band changed their name officially to Erocktica as of January 2004 due to the overwhelming response the band received as Erocktica both in Europe and worldwide. Erocktica made their first trip over to Europe in summer 2002. Brought over by the Bold Brothers Agency to tour Holland, Erocktica performed for over 3,000 people at the Oerkracht Festival on their first European tour. Originating from New York City, the band performed their first full live show in 2000 at the legendary East Village club CBGB's, whose historical stage has been graced by the Ramones, the Plasmatics, Iggy Pop, Joan Jett and Blondie. From then on they built a loyal world following in the United States from Boston to Miami and New York to LA, and subsequently in Europe from Helsinki to Milan and Barcelona to Amsterdam -shocking crowds with their wild antics and pleasing with their entertaining brand of rock and roll.

Erocktica charged into 2007 with full force and again branded the world with sex and rock n again having recorded their latest album, Second Cuming in Vasa, Finland, and mastered it in the USA at famed Frankford Wayne Studios in New York City. With such hard driving rock riffs in ?Skin to Win? and the title track ?Second Cuming? fun rock anthems as ?I Love Girls? and ?Paint it Pink?, and the ominous sounds of ?Phone Sex? and ?You Do?, the album is the culmination of great rock n roll musical talent combined with brooding sensual vocals, and erotic lyrics that mix philosophy, sex, and rock n roll. Working on their much anticipated DVD entitled Second Cuming: Erocktica live in New York City, Erocktica is alive and ready to spread the message of free speech, intolerance of censorship, and sex, lust, and rock n roll worldwide.