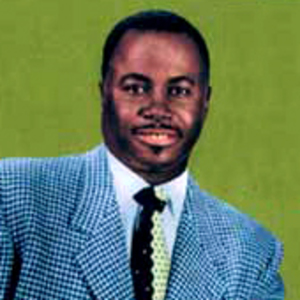 Ernie Fields (1904-1997) was an African-American trombonist, pianist, arranger and bandleader. From the late 1920s, he led a band in the Tulsa, Oklahoma area called the Royal Entertainers, and eventually began touring more widely, and recording. In 1939, he was invited to New York by John Hammond to record for the Vocalion label. He did not become a star, but continued to work steadily, recording for smaller labels, and gradually transforming his sound through a smaller band and a repertoire shift from big band swing to R&B.

He continued to straddle these styles into the 1950s, playing swing standards such as "Tuxedo Junction" and "Begin the Beguine" in a rocking R&B style.

In the late 1950s he moved to Los Angeles, joining Rendezvous Records, for whom he ran the house band. This included pianist Ernie Freeman, guitarist Rene Hall (who had previously worked with Fields in the 1930s), saxophonist Plas Johnson, and drummer Earl Palmer. In 1959 this band was responsible for an international hit with an R&B version of Glenn Miller's "In The Mood", credited to the Ernie Fields Orchestra. The band, with minor changes of personnel, went on to record instrumentals under many different names, including B. Bumble and the Stingers, the Marketts, and the Routers.

Rendezvous Records folded in 1963, and Fields retired soon after.

His son, saxophonist and bandleader Ernie Fields Jr., has worked with soul and funk artists including Bobby Bland, Rick James, and Marvin Gaye. He also made his own records in the 1970s, of which "Avenging Disco Godfather" is one of the more memorable titles. In the 1990s he began touring with trombonist Fred Wesley, playing bagpipes as well as saxophone.

Ernie (In The Mood) Fields - Blast From The Past