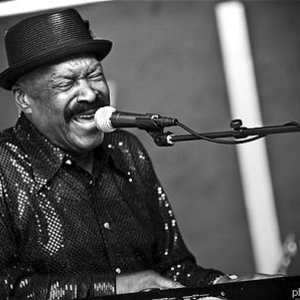 There is no doubting the authenticity of pianist Ernest Lane's musical credentials. Ernest is a terrific piano player and singer who's looking to be a headliner in his own right. Born in the heart of Delta blues country in Clarksdale, Mississippi he received, along with childhood pal Ike Turner, occasional piano tuition from family friend Pinetop Perkins. Ernest has had his own bands throughout the years although he's probably best know for his work with folks like Robert Nighthawk, Earl Hooker and his life long pal Ike Turner.

Ernest has had his own bands throughout the years although he's probably best know for his work with folks like Robert Nighthawk, Earl Hooker and his life long pal Ike Turner.

Unfortunately Ernest hasn't gotten in the studio all that often; he cut his first record under his own name for Blues & Rhythm in 1952 (an off shoot of Modern), "What's Wrong Baby" b/w "Little Girl, Little Girl", plus a pair of singles in L.A. in the early sixties, "What Kind Of Love" b/w "Sliced Apples" for M.J.C. and "What's That You Got" b/w "Need My Help" for Sony. Ernest wasn't even aware that the Blues & Rhythm sides were issued but does recall the session which was setup by Ike Turner who was acting as a talnet scout for Modern.

As for his session work, Ernest appears on on the July 1949 Robert Nighhawk session and it was either him or Sunnyland Slim on the September 1948 session. The titles include: "Down The Line", "Handsome Lover", "Return Mail Blues", "My Sweet Lovin' Mama", "She Knows How To Love A Man", "Black Angel Blues ( Sweet Black Angel)", "Anna Lee Blues (Anna Lee)", "Return Mail Blues" and "Sugar Papa."

In 1961 Nolen's band, with Ernest, backed George "Harmonica" Smith on a session for Sotoplay: "Sometimes You Win When You Lose", "Come On Home", "You Can't Undo What's Been Done" and "Rope That Twist."

Ernest also recalls playing on the Earl Hooker's 1969 album Sweet Black Angel even though Ike Turner is listed as the pianist. In 1969 he did some studio work with Canned Heat which can be found on The USA Sessions ? Classic Recordings from 1969. 1969 was also the year he toured with the Monkees whom he backed as a member of Sam & The Goodtimers.

In 1962, Ike recruited his old buddy to play piano in his band. Lane went on to form the Group called The Goodtimers, and he also played with the Monkees. After a spell away from music he joined Ike Turner again and now. Lane was at his home at the time he passed away.

Born With the Blues