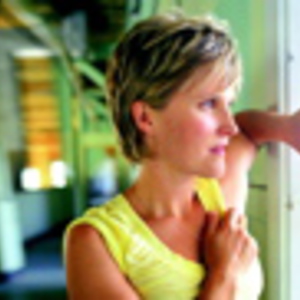 Globally rooted Erika (pronounced eddie-kah)Luckett carved her personal story from a transcontinental upbringing. Born in Mexico with guitar propped against the cradle, Erika began exploring songwriting and music making during a unique childhood that zigzagged across the Venezuelan countrysides, Brazilian rainforests, and South American metropolises . She stretched her imagination and musical palette during an adventurous teenage stint in Paris, where her songs and guitar echoed in the underground.

With lyrics that capture the intimacy of our human experience and melodies that make distant lands feel like home, her songs invite the listener into terrain that is both vast and familiar. Describing what happens during her transmission is like trying to explain the way the sunrise casts light across birds in flight. Her energetic exchange transcends the power of sound and penetrates the hearts of her wide reaching fan base. Some liken it to being struck by a bolt of goodness.

Erika Luckett creates a powerful expression of world inspired music. Poetic and sensual, her voice conveys lyrical depth, and her fiery, innovative guitar playing creates an orchestra of sound with only six strings. This unique expression of world class artistry has earned her a slew of awards and accolades. Most recently she was named Female Artist of the Year 2004 by Just Plain Folks, (the world's largest independent music organization which reviewed over 10,000 albums and 140,000 songs from 85 countries around the globe) and was honored by Modern Woman Today as one of the 100 Most Outstanding Women of the Year (along with Queen Elizabeth, Oprah Winfrey, Hillary Clinton, and Madonna.) Whether singing in English, Spanish, French or Portuguese, Erika Luckett's music reminds us that beauty and a luminous heart transcend any boundary.