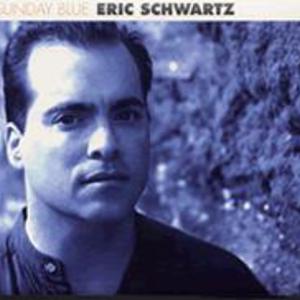 Since 1998, he has been on the road playing "folk" venues: festivals (Kerrville, Philly Folk, Falcon Ridge, Oregon Country Fair, South Florida, for example); premier venues such as The Bottom Line, The Ark, The Birchmere, The Tin Angel,Club Passim; and the gigs that keep the singer-songwriter fed: house Concerts, coffeehouses, colleges etc. He composed the score for a musical adaptation of Beowulf presented as a workshop in NYC starring Andre DeShields and Billy Porter. Dr.

Demento, a hero of his, plays Schwartz's stuff now and then ("Charliesomething" was #2 for the year a couple of years back.) 'Napster Rap' was featured on NPR's All Things Considered.

A degree in biology from Tufts University and a former career as a touring bilingual actor has furnished Eric Schwartz with a deftly analytical mind, an awesome imagination, and a soul which thrives in the spotlight. Piano was Eric's first instrument. After studying guitar in Madrid, he spent a year performing on the streets and in the caf?s of Europe (he can sing songs in five languages and speaks Spanish and French). Eric then moved to Greenwich Village and quickly became a staple on the vicious Village bar scene for five years as he honed his craft as an original singer/songwriter, and began pulling attention from some of the world's toughest audiences.

PA disc jockey Otto Bost wrote, "Eric is a writer who has mastered many styles, and his songs are as varied as the people of New York...The thread that holds them together is the solid craftsmanship of a young men with a pen in his hand, and an intriguingly offbeat view of the world." Fans and music journalists have tried to describe an Eric Schwartz show. Some talk about Eric's gorgeous voice with its baritone-to-Bee-Gees vocal range, the intelligent way in which he uses satire and irony to convey a message, or the tremendous energy and personality he infuses into every show. But most will add, "You'll just have to experience it for yourself.' It should also be noted that he's played the Kerrville Folk Festival three years running. "It's been one of the very best things in my life, that festival in the hill country of Texas. I've had fantastic artists joining me to fill out the sound: Freebo, Jack Williams, Stephanie Corby, Kristin DeWitt, Oliver Steck, Kevin So, and Eric Gerber to name but a few. And this year, I had the honor of serving as a Judge in the New Folk competition there, which was tough, considering that all the participants were excellent. I got to sit next to Texas superstars Slaid Cleaves and Ruthie Foster, and get heckled from the stage by Steve Gillette"

Keep Your Jesus Off My Penis

That's How It's Gonna Be