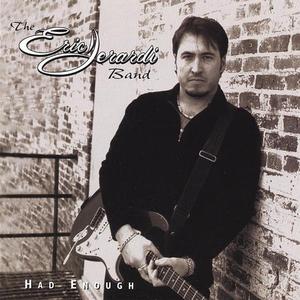 The Band Posted by Eric Jerardi Friday, January 16, 2009 Eric Jerardi, of the Eric Jerardi Band, is considered a true blues rocker. It's his relentless commitment to touring that has resonated so deeply with audiences. His live shows are legendary all across markets in the United States. From bloody fingers to late night tequila and beer- Jerardi's audiences are known to be the biggest drinkers, and clubs love it. This commitment has picked up sponsorships with Budweiser, Fender, and SITS strings.

Eric Jerardi, of the Eric Jerardi Band, is considered a true blues rocker.

It's his relentless commitment to touring that has resonated so deeply with audiences. His live shows are legendary all across markets in the United States. From bloody fingers to late night tequila and beer- Jerardi's audiences are known to be the biggest drinkers, and clubs love it. This commitment has picked up sponsorships with Budweiser, Fender, and SITS strings.

Jerardi has released 6 CD's since 1997 and has worked with some of the industry's best producers and notable musicians. From working with producer David Z [Prince, Fine Young Cannibals] to recording with Chuck Leavell [Rolling Stones], Jerardi is having the time of his life. This new CD titled ?Live at Waukesha Blues Festival? was recorded August 8th, 2009 and really represents how polished Jerardi has become as an entertainer. The tightness of the band is amazing which can only be achieved through years of performances lead by veteran bass player Jon Arnold and drummer Joe Prescott ? at the time of the recording was just out of retirement.

?All those years of honing my craft have brought me to this comfortable place in my life and my music?? states Jerardi. ?I'm not as serious as I used to be. I'm writing more fun or witty songs, as well as my usual heartbreakers, and I like it. My playing, singing and writing have never been better, and my most recent live CD will showcase that.?

Jerardi began his musical career with winning a battle of the bands contest in 1989 at Ohio University. Two years later, Jerardi won another contest at OU, which secured a spot on MTV as the Midwest's Best Unsigned College Band. Over the years, he has shared the stage with Little Feat, Robin Trower, and Jim Belushi at the House of Blues, Chicago and LA; played with Eric Johnson on Cape Cod; jammed with Keith Urban, Wynonna, and Kenny Chesney in Nashville; and headlined B.B. Kings in Memphis, Nashville, LA, and Manhattan. He has played in countless blues festivals, major concerts, and a myriad of other shows around the country for the last 20 years

Jerardi's debut CD was released in 1995. The album highlights Jerardi's use of riffs and melodic leads which have become his signature style. His first live release followed, exposing audiences to the intensity of Jerardi in concert. In 1998, Jerardi recorded Had Enough, a collection of blues rock compositions that are provocative and partially autobiographical. The song ?Fate? considers the battle between fate and free will. ?Tortured Soul,? ?Tomorrow,? and ?Pain? laud Jerardi's only brother, who succumbed to cancer that same year.

Jerardi released another live album in 2001, and followed it with Virtual Virtue the following year. This release featured Chuck Leavell, the keyboardist and pianist for such renowned acts as the Rolling Stones, Eric Clapton, and the Black Crowes. Leavell's melodic arrangements amplified Jerardi's powerful sound. In 2007, Jerardi released Restless, which is considered one of his boldest statements to date. "Sonically, it's nothing like Virtual Virtue," Jerardi says. "Virtual Virtue is much more polished. I spent less time analyzing everything on Restless because I wanted it to be more natural."

Currently, Jerardi's new CD Live at Waukesha Blues Festival is a true testament to life on the road. The heat index was 130 degrees on the day of the show, and two days prior Jerardi had cut his finger?blood and sweat are a combination for trouble on a vintage '62 Fender Strat. When his finger opened up and blood poured out all over his guitar, it started to short out; however, it made for an interesting recording. As the CD cover shows?so much for the ?glamour and the glory?? the show must go on! Next stop Albuquerque.

Well crafted pieces that take you on a ride of musical styles without fear, without genre, without prejudice...with style, with feeling, with talent, with joy, with funk, with guts, with awesome playing and variation!

Eric Jerardi has exploded onto the national scene as one of this country's foremost blistering blues/rock players!

Eric is really superb in this CD [Live Vol I], full of the most powerful electrifying aggressive rock-blues. Besides, he is backed by a de luxe trio, a non-stop rhythm engine, who give him a perfect support along the whole cd. Sixteen sweaty effective songs that will impact to any hard-power flamming blues fan. Eric knows how to use pedal guitar effects with sobriety and good taste. So I can highly recommend this cd to people who like volume, distortion and aggressive guitars.

The ever evolving talents of Eric Jerardi have reached a level of maturation on this brilliant piece of Memphis aural art. Recorded primarily at two Tennessee studios on the banks of Mississippi, this effort reflects not only the traditions implied by the city and the river, but the quality of work that is part and parcel to that area's musical legacy. With the Dominating keyboard of legendary Chuck Leavell, this is truly a "band" recording. Everyone, especially Jerardi, is listening closely, and Leavell's contribution is obviously exerting a positive influence. There are a greater number of influences creeping into the musical aspects of this release, and they're refreshing. Jerardi remains focused, not prone to the excess of the road ...