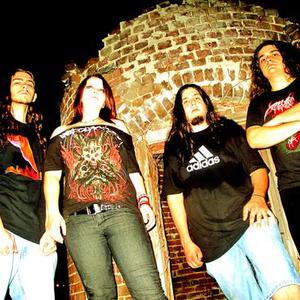 In the beginning, in early 1983, there was a small L.A. westside punk rock band named S.H.I.. Nick Fit played drums along with Andrew Brown on guitar, Dave Hornbaker on bass, and Loren Mizrachi on vocals. Within a few months, Evan Shanks was recruited to replace Dave on bass and David "UXB" Hinnebusch replaced Loren on vocals. When David came in, all the lyrics for existing S.H.I. songs were re-written and the band became Punx For Survival.

Nick Chavez was recruited to fill in for Andrew on guitar while Andrew was overseas. Chavez brought a whole new dynamic to the band with his speed-riffing style of punk rock and the band became Entropy. Andrew left the band shortly after coming back and the lineup of David Hinnebusch on vocals, Nick Chavez on guitar, Nick Fit on drums, and Evan Shanks on bass has stayed practically intact since 1983. For several months throughout 1984, Entropy added a fifth member in Mike Calder on lead guitar. When Mike left, the lineup went back to the Core Four and has stayed that way ever since.
Entropy played their first gig in October of 1983 in Maywood, California (near Compton) with the Skoundrelz. They went on to play a steady stream of shows for Goldenvoice and other promoters with many of the well known punk bands of their time at venues that were staples of the L.A. punk rock scene. Some of the noteable venues and bands that Entropy had the privilege of sharing the stage with include: Olympic Auditorium with Adicts/Toy Dolls, Wasted Youth; Fenders Ballroom with D.O.A./45 Grave, Youth Brigade/7 Seconds, D.R.I., English Dogs; De Anza Theater with Dead Kennedys; Stardust Ballroom with Circle Jerks/Wasted Youth; Cathay De Grande with Agression; Anti Club with the Minutemen, the Mentors; Culver City VMA with the Dickies. Noteable out of town gigs include: San Francisco with D.O.A., D.R.I.; Santa Barbara with the Melvins/NOFX; and all around the southwest Winter 85-86 with NOFX/the Grim/Scared Straight which included Houston with Descendents/NOFX
Entropy recorded their first demo tape in March of 1984. The songs were a mix of old S.H.I. influenced tunes such as "Members of Society", "G.N.P.", "Do What Your Told", and "Melt My House" along with the newer more hardcore tunes such as "Adam Ate the Worm", "Draft Or Die", "Avoid Breathing", "You Deserve To Live", and "Ski Mask Politics". This tape represented the music that Entropy brought to the L.A. punk scene throughout most of the 1980's.
By the end of that decade, after playing together for many years, Entropy began to do what most bands do after years of being together; writing songs that deviate from the "norm" and experiment with other influences. This phase of Entropy carried into the early 1990's and culminated in their second demo tape recorded in 1992. The songs were a mix of tried-and-true Entropy hardcore punk rock tunes such as "S.W.A.Y.S.P.I.T.W.", "Or Was He Faking?", The Trio ("Food For Thought", "Headcheese", "Disperse"), and "Nuts and Bolts" along with the newer experimental tunes such as "Crocodile", "Drive On", "Soul Ocean", and "Green Raisin Blues". The spectrum of songs sent mixed signals to the industry and the demo tape was not well received. Essentially, the reaction was "We like the fast stuff but what's with the slow shit?".
By the late 1990's, Entropy was no more. The Core Four had drifted apart, seeking out a means to survive, some branching off into other musical endeavors. Entropy never broke up, they just simply stopped playing, but never lost touch with each other.
Fast forward to 2004. David, Fit, Chavez, and Evan converge on their old practice room in West L.A. for a Thursday evening of jamming and hanging out. That night followed with other Thursday night gatherings and, after the rust was gone, it was 1984 again!! Entropy wanted to bring the hardcore back to the public and on Thursday, Sept. 16th 2004, Entropy played their first gig in ten years in Hollywood. Since then, Entropy has played around the southland at venues such as Fitzgerald's, Anarchy Library, The Doll Hut, The Murder Scene, Rock-It Cafe, The Cat Club, and DiPiazza's.
In early 2006, Entropy had the 1992 demo tape digitized and, after stripping out the slower, dirgier tunes, used all the remaining hardcore tunes to create their own self-titled CD. This CD is currently available at CD Baby. If you'd like to sell this CD, contact Entropy here.
In the summer of 2006, Entropy went into the recording studio for the first time in 14 years and recorded three tracks for their debut 7" vinyl "Gross National Product" brought to you by Bad Idea Music. The three tracks, "G.N.P.", "You Deserve To Live", and "Who Says I Should" are quintessential early 1980's L.A. hardcore punk rock. This is the way Entropy started and this is the way Entropy is now!
Entropy - You Deserve To Live - Benway Music May 19th 2007

The Second Law Of Thermodynami

The Second Law of Thermodynamics