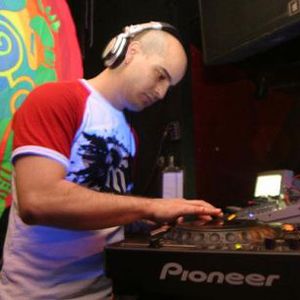 Emiliano Solazzi Griminger (Moti Griminger) was born in December of 1974 in Buenos Aires, Argentina. At the age of 11 his family and him immigrated to Beer Sheva, Israel, where he lived most of his life. At the age of 15 he started to take guitar lessons and by the age of 18 he was already leading a very succesful Israeli death metal band called CEREBRAL COMA, which had a mayor success in the international and national underground scene.

In 1992, Emiliano hooked up with Ziv Matushka, another pioneer in the Israeli electronic music scene and, together, they started to experiment with more Industrial music and eventually writing Goa and Psy trance. Ziv joined P.Cok, and Emiliano continued his project as ENERTOPIA. The first single by Enertopia was released in 1996 by B.N.E Israel in a compilation called DESTINATION ISRAEL, and after a few months he was signed by KREMBO records. The first full length album was called MAGIC FOR ETERNITY, released in 1997, followed by the second album called FACE ADAPTOR which was cowritten with Yuli Fershtat AKA B.L.T, Perfect Stranger. In between 1996 and 1998 Enertopia have released two full albums and numerous singles. Now Enertopia is back with new material in the studio, already collaborating with talented artists around the globe such as A.P.E from Israel, OVERDREAM from Ukraine and more surprises to come. Enertopia is now an Alladin records artist promising exciting music and exciting DJ sets.