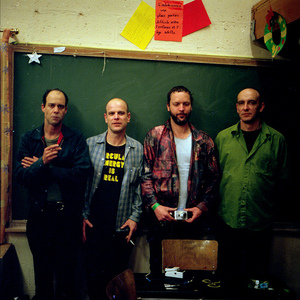 Fitting to its name, the San Francisco quartet Enablers writes songs that are equally manipulative and encouraging to our darkest desires. The band made up of journeyman veterans of Swans, Tarnation, Nice Strong Arm and Toiling Midgets merges dramatic and flowing melodic soundscapes -- of which SF Gate calls "possibly the world's best power trio" -- with the visceral spoken narratives of underground literary veteran Pete Simonelli.

It's almost as though the band's fluid and often soothing music exists to distract our better instincts while Simonelli whispers above it all, urging and lulling us into the dark, decrepit world of his words.

Guitarist and recording engineer Joe Goldring has collaborated with Swans, Toiling Midgets, and Doug Scharin of June Of &rsquo;44 under the moniker Out In Worship, as well as with Neurosis' Steve Von Till's solo projects.

Guitarist/bassist Kevin Thomson, veteran of Timco and Nice Strong Arm, has been playing and touring for twenty years and with his own projects and has been a writing partner with Goldring for ten of those years collaborating on Morning Champ, Touched By A Janitor, and now Enablers.

Drummer Yuma Joe Byrnes has lent his unique take on the trapset to Tarnation, Broken Horse and others.

Pete Simonelli has been continually writing and publishing his efforts in underground literary journals for years and now brings his poems to the table for Enablers.