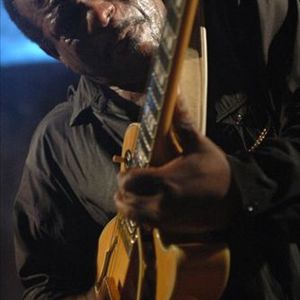 I was born in middletown,ohio but grew up in dayton,ohio,my mother's side of the family was the musical side she's a gospel singer who sang in the gospel chorus,my beginnings started there she also played piano so did my aunts,my uncles played sax,trombone & trumpet.i started playing in gospel groups and traveling the midwest and south soon i started learning more on my guitar even though i started writing lyrics before.I also use to play for different churches.I evenually started listening to and learning the blues and r&b,soul and later jazz.

decided to move to LA in 1974" after listening to my father and friends about moving to a bigger city like LA because i had some family here,i was asked to join the hit group from london "Heat Wave" but i thought that was too far away so i moved to LA feb.1975" to audition for singer "Bobby Womack" but "Barry White's" office was in the same office building and Bobby's PR told me that Barry White was also looking for guitarist so i went to his office and met the necessary people,they sent me to their rehearsal studio here in hollywood,i was auditioned by Barry White's music director and two weeks later auditioned for Barry and the rest became history.You can find my extended bio @ :w w w . myspace . com/ emmettnorthjr :i hope you enjoy my music,my videos & photos sincerely & musically,Emmett North Jr.

Wrap Me In Your Love

Have You Got The Time