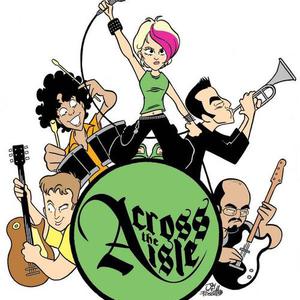 Across The Aisle is a dynamic, female-fronted, New York City-based band that have crafted a unique sound blending elements of ska, pop, punk, and reggae. With energetic live shows and stylish accents of kelly green, Across The Aisle have succeeded in creating an identity that sets them apart from other bands. Having recently released their third EP, In Ska We Trust, Across The Aisle is continuing to work tirelessly to gain even more exposure and build upon an existing loyal fan base.

In 2008, the band debuted with The Mercy EP which caught the attention of Steve Shafer, formerly of Moon Ska Records, who wrote ?The Mercy EP is one hell of an impressive debut?somebody should sign ?em to a label now!? Across The Aisle followed The Mercy EP with another 4-song EP, Change Nothing, self-released at the end of 2009. The D Throg Ska Review wrote that Change Nothing has ?a greater depth of sound than you may expect, especially from a young ska band.?

Since their inception, Across The Aisle has had the pleasure of sharing the stage with The Toasters, The Pietasters, Sonic Boom Six, Dave Hillyard, Big D and the Kids Table, The Pilfers, Westbound Train, King Django, Mighty Mystic, Sonic Boom Six, Roast Beef Curtains and a number of other talented acts.