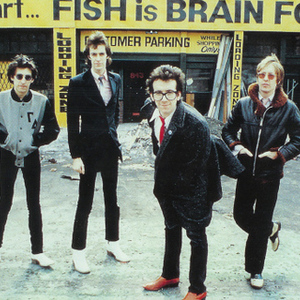 Elvis Costello & The Attractions was the band formed by Elvis Costello in 1977. It comprised Steve Nieve (ne Nason) on keyboards, Pete Thomas on drums and Bruce Thomas (no relation) on bass. He recorded and toured solidly with them until 1984, when he disbanded them to pursue solo projects. He reconvened the band for one-off albums and tours over the following decade; in particular from 1994 through 1996.

He reconvened the band for one-off albums and tours over the following decade; in particular from 1994 through 1996. He has also enlisted Nieve - and to a lesser extent Pete Thomas - for other recordings and performances, and continues to do so to present day. Costello and Bruce Thomas had a notoriously stormy relationship, documented in Thomas's autobiographical novel The Big Wheel in 1990. The original Attractions reunited for the Brutal Youth & All This Useless Beauty sessions despite Elvis and Bruce's differences. Pete Thomas and Steve Nieve, along with Bruce Thomas' replacement Davey Faragher, now form Costello's current backing band, The Imposters.

They most recently appeared together, although they didn't play, when they were inducted into the Rock and Roll Hall of Fame in 2003.

All This Useless Beauty (2001 Remastered) CD2

All This Useless Beauty (2001 Remastered) CD1

All This Useless Beauty