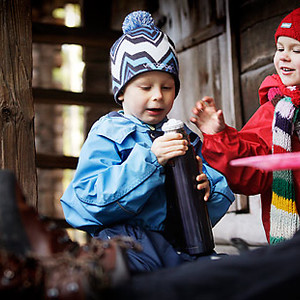 Ella ja Aleksi is a Finnish duo consisting of two children. The project was founded in 2004 by Markus Koskinen of the band Teleks and Sampo Haapaniemi of Egotrippi. It released an album named Lenni Lokinpoikanen (Lenni the Baby Seagull) which went platinum (30,000 sold copies) and stayed on the top four of the Finnish charts for four weeks. The latest album is Kolme muskettisopulia (The three musketeer lemmings) 2005.

The band's lyrics are about human relations, family, and close surroundings. For example, the lyrics of the radio hit MC Koppakuoriainen (MC Beetle) are about the importance of parenting and not bullying others.

The identity of the children has not been given out to protect them from publicity.