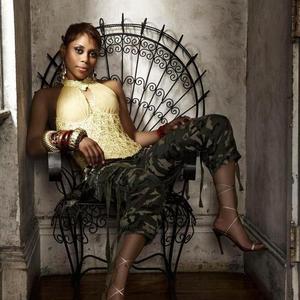 It all starts with the voice. A soulful instrument that is both powerful yet strikingly vulnerable; an engaging gift that transcends musical genres and industry trends. For acclaimed singer/performer Elisabeth Withers, that voice and a fierce spirit garnered her a prestigious Tony Award nomination for her role as the seductive scene-stealer Shug Avery in the Broadway mega-hit The Color Purple. Now the Joliet, Illinois-born singer/songwriter is set to release her debut solo album It Can Happen To Anyone on the legendary Blue Note Records.

?My music is a reflection of my life,? says a matter-of-fact Elisabeth. ?Through my work, I want people to know that with a strong self-love, work ethic and fearlessness, anything is possible.? Indeed, It Can Happen To Anyone makes its case for the Berklee School of Music and NYU graduate. It is uplifting and honest but it is also sensuous and passionate and at times seriously sexy, unpredictable and just plain infectious.

Fans of Elisabeth Withers' Broadway work will be taken aback by the impressive range of her album, which mines everything from R&B, gospel and pop to old school cabaret and rock. Not surprising when you consider Elisabeth loves both Millie Jackson and Sheryl Crow.

The title track finds Elisabeth warning the object of her affection over a funked-up groove with such bold proclamations as, ?When you are born until ya grow old, somewhere it's blowing in the wind. Love don't care because it comes on, it's own time!? The church inflected track ?Simple Things,? showcases Elisabeth's deep timbre vocals as she encourages listeners to see the beauty in everyday life. ?The World Ain't Ready? showcases its message of female empowerment over an infectious reggae dancehall rhythm. And on the warm love letter feel of ?Heartstrings,? she coos of a love that makes you ?want to scream like Tina,? and ?shine like the brightest star.?

At first glance, music seemed like an unlikely path for a young and confident Elisabeth. Raised in a middle class, Midwest household, where her mother excelled as a mathematical engineer and her father was a political powerbroker, an interest in anything remotely resembling the arts might have raised eyebrows. Luckily Withers, her sister and two brothers were supported by parents who created a loving environment where individuality was as much a premium as a discipline. At five-years-old, Elisabeth began singing along to her parents' record collection.

?All of my brothers, including my dad, would laugh at me,? she muses. ?Just picture a little me belting out some Natalie Cole or Gladys Knight over dinner, veins popping out of my neck, trying to reach all of these notes? it was too funny. But I remember my mom would get angry and say, ?You guys will not laugh at your sister. She's going to sing!?

Elisabeth saw the meaning of sacrifice first hand as mom placed her professional life on hold to raise the kids while her father worked extra hard to make sure all four kids had everything they needed to excel. By her early teens, performing at talent shows and social engagements had become the norm. The gifted singer saw her exceptional talents garner notice when, in 1993, she received a scholarship to attend the prestigious Berklee College of Music in Boston. Four years later, Elisabeth did what virtually every aspiring singer-songwriter has done since the dawn of the jazz age: She set out to conquer New York. By the time she graduated NYU in 2000, Withers had caught the attention of respected producer, arranger and songwriter Tony Moran (Patti Labelle, Whitney Houston, Luther Vandross).

A string of studio back-up sessions followed as Elisabeth began to cultivate a reputation as a first-rate vocalist; so much so that Moran recruited her to co-write the dance club classic ?Rising? (2002), a track that reached the top 5 on the Billboard charts. Elisabeth Withers was now going under the diva alias Elle Patrice. Another hit single followed ?Emotions?, and in 2005 Elisabeth received a call from industry friend and music legend Nick Ashford, who suggested the vocalist audition for the Oprah Winfrey-produced stage adaptation of The Color Purple. She was more than up for the challenge as she won over producers Quincy Jones and Winfrey. Elisabeth's triumphant run on Broadway soon attracted the interest of record labels. With its rich musical heritage and underlining focus on the art, Blue Note was the perfect home.

?I've never been afraid to try anything. I guess that's why I've had a chance to try so many different things,? Elisabeth says of her budding career. ?The values that my parents taught me growing up allowed me to go into any situation, from being asked to sing for Paul McCartney to doing ?The Color Purple? on Broadway in front of someone as iconic as Oprah and to recording an album for Blue Note, having an album of songs that I actually had the chance to write. It's been a wild ride and a humbling experience.?

?I hope people will listen to the songs on the album and come away with the feeling that I have, which is why I called the album It Can Happen To Anyone. For that is truly what I believe.?

It Can Happen To Anyone