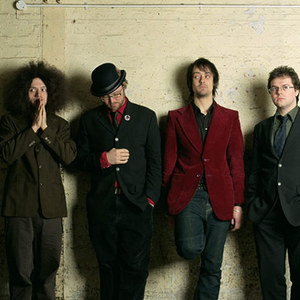 Bonding over a mutual distaste for musical sterility and an inclination toward the more exciting and dangerous end of modern music, Acoustic Ladyland have been blowing minds since their inception in 2001. The band is Pete Wareham (saxophone), the recently-joined Chris Sharkey (guitar) Ruth Goller (bass) and Sebastian Rochford (drums). This fresh incarnation of Acoustic Ladyland sets the bar even higher than before and has arguably achieved their most potent and lucid album to date, the long-awaited Living With A Tiger (out July 6th).

Their previous three albums have won them a host of awards and critical acclaim, so if that's anything to go by, this brand-new music should go down a storm.
Recently, individual band members have recorded and performed with an enormous array of artists, including Supergrass, Brian Eno, David Byrne, Polar Bear, Trio VD, Jack De Johnette, Basquiat Strings and Dennis Hopper Choppers along with various other writing and recording projects.
With their legion of fans including discerning types like Scott Walker, Chris Morris and the Mighty Boosh, experiencing Acoustic Ladyland live is not to be missed.
?Acoustic Ladyland have burst out of the jazz bracket to become one of London's most raucously exciting live acts ? in any genre.? Evening Standard

Living With A Tiger