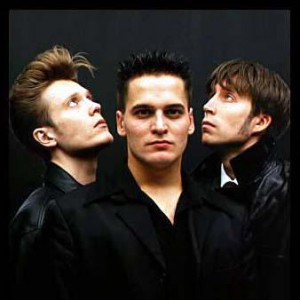 Elegant Machinery is a Swedish synthpop band. Borrowing heavily from the likes of Depeche Mode, they are one of few recent bands dedicated to making traditional synthpop music. Along with such bands as Page, S.P.O.C.K, Sista Mannen P? Jorden and KieTheVez they define the sound of the Swedish synthpop movement. Heavily influenced by acts like Yazoo, Human League, Depeche Mode, Rational Youth and Robert Marlow, Richard Johansson and Leslie Bayne started the band in 1988 under the name Pole Position.

Robert Enforsen joined the band as lead vocalist in 1989, and the band released their first demo, at which point they changed their name to elegant MACHINERY, a name derived from the album by Data.
Due to Leslie Bayne's stagefright, Johan Malmgren joined the band as a tour musician in 1992. He later became a permanent member.
The band was very successful in Sweden, with a number of successful singles and various awards. In the rest of Europe, their biggest break into the mainstream was with the single Process, which reached number 5 in the Spanish charts.
elegant MACHINERY disbanded in 1999.
In 2001, the band temporarily reunited (with Johan temporarily replaced by Jarmo Ollila of Daily Planet) for their first-ever American appearance, followed by a performance in Mexico. Over the next few years, the band performed a number of times in Europe.
In October 2004, after a successful gig at Romo Night in Gothenburg, the band decided to work on new music. Johan, Richard, and Robert have been joined by original member Leslie Bayne, and plan to release a new single in 2006.
During the band's hiatus, Robert Enforsen worked on a number of side projects, including Enforce, Hype, Gobble & Gag, and Red Light District. Meanwhile, Johan Malmgren joined the Swedish band S.P.O.C.K as a keyboardist, programmer and composer. Johan and Robert also produced the debut album "Lost in a Maze" of the Swedish-British band Univaque in 2004.

A Decade of Thoughts