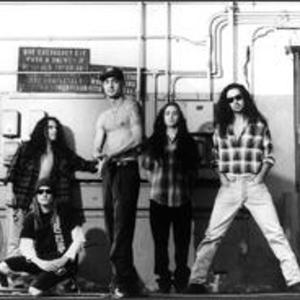 The roots of the Electric Love Hogs go back to San Diego, where Feldmann and Hendrix/Metallica fanatic Donny Campion had been playing together since they were 15. The two hooked up with the Glendale, California-born Fernandez and Salem, Oregon native and Kiss Army member LeMieux to play their first gigs in San Diego before moving to L.A. to try cracking the local club scene. They eventually added another guitarist in Kushner...

The group built a local following which included M?tley Cr?e drummer Tommy Lee, who ended up producing a pair of tracks on the band's album ("Sittin' Pretty," "Just Another Day"). Other contributors to the record, produced by Mark Dodson (Anthrax, Suicidal Tendencies), include Jane's Addiction/Infectious Grooves' drummer Stephen Perkins, who plays all the percussion on the record, Suicidal/Infectious Grooves' member Robert Trujillo; Kenny Laguna on piano and Trulio Disgracias' rapper, Bronx-style Bob.