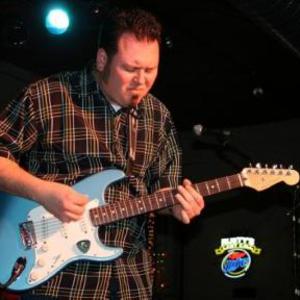 Elam McKnight I got exposed to the blues when I was young, says Elam McKnight. I had an uncle who used to carry me to Beale Street in Memphis, nothing like it is now, and there was this old cat down there named Alabama Red. He would play guitar in this old gazebo that is now long gone to the tourist trade. He played the really old gutbucket stuff and he would look in my eyes and I sat there transfixed and say ?I can tell you want to do this just by the look in your eyes.

I was maybe 15 and it did something to me. It scared me to be exposed to it. That rascal put something on me that I have yet since been able to wash off.

What is immediately obvious when you hear McKnight is that he did not get this thing washed off of him. Heralded by critics as one of the best new artists of the future primitive movement, a new crop of artists who abate away from mere copying and clean studio slick-ness to instead tangle themselves in the deep roots of the past, and take a unique spin on the sounds of old and always searching anew for the primal place where all great music stems from. Cats like me and a bunch of others are in this thing for the right reasons. Most of us are just as happy to be playing in some juke joint or country picnic as any other place. Another unique feature of our little thing is that it is almost never about competition, a total pitch in and do your thing. It is very tribal and old world.

As a youngster McKnight caught the curse of music. I devoured any blues album I could get my hands on and as I would find one artist like Muddy Waters then I would learn he got some of his from someone like Sonhouse or Charlie Patton. Each artist became like a doorway into another bunch of folks, all the time the sounds just got deeper. And of course the whole time I am also listening to Punk, Rock, Hip Hop and all the things which Blues and Real Folks Music influenced. I was astounded by the completeness of American music, like a great long ladder, and still am. I knew one day I wanted to be another rung on that ladder, to contribute in some way, to belong to something that is real.

McKnight approaches many styles in his playing, from deep Delta by the likes of Muddy Waters, Robert Johnson, and Sonhouse to the Western Tennessee musings of Sleepy John Estes, Yank Rachell, and John Lee Sonny Boy Williamson. All the while he keeps a bit of the Punk element in his attack. Punk is more of an attitude, a way of doing which I have always respected. I mean not just musically but even the whole DIY mentality of we will never stop. I try to bring some of that along for the ride, always. But one style in particular ravaged McKnight when he had all but decided to give up playing entirely.

I was in a bad place, bad marriage, and bad everything. I was about to give this thing up. You know the whole down on me sort of thing. Besides I had pretty much decided, out of sheer ignorance, that there were not any Muddy or Howlin Wolf guys left out there. Then I heard an album someone had left sitting on the sidewalk one day and it literally changed my world! The album was a tattered copy someone had discarded on the sidewalk, amid a pile of things left in an apparent move, and its title was ASS POCKET of WHISKEY by R.L. Burnside, a living master of North Mississippi Hill Country Blues. McKnight was blown away.

First off, it scared me, real bad, which is always a sign to me of great music. And then, as I listened deeper, I realized that there were others down there in the Hill Country. It gave me hope and I have not put my guitar down since. After escaping some of the badness in his life, McKnight took refuge in a one-room apartment with his few belongings and his guitars. It was basically, no it was exactly, a hovel. It was so bad when my baby brother helped move me in he was scared to leave me there. I worked, came home, and strapped the guitar to me and made up my mind then that Life ain't worked out so good thus far so it is up to me to change it and this guitar is how I am going to do it. Pretty crazy huh?

McKnight wrote constantly, saving meager funds for recording, and finding the right musicians to work with. Then a perchance meeting, in Nashville, with Cedric Burnside (Grandson and drummer for R.L. Burnside) turned things up a few notches. Cedric and I hit it off immediately and he invited me to come to the Hill Country. I went, chilled, and met his uncle Garry (Junior Kimbrough bassist) and we did a session in a house in Chulahoma, MS. This became the basis of his first album. I knew then I had three songs I could build something off of. I also got to meet Big Daddy (R.L. Burnside) and that was something I never guessed I would do. It is weird how one small thing can change you irreparably. I mean what if someone else had found that CD on the sidewalk other than me?

McKnight has released two albums in the last three years. Critics praised his first, BRAID MY HAIR, as a breath of fresh air in the sometimes-stale climate that is predictable ?bar band? blues. With minimal funding, basically none, McKnight wrote, produced, promoted, recorded, and self released the album on his own Big Black Hand label. The music was enough to get massive airplay all over the globe and media attention not common for a completely unknown artist. I have to know that it was strictly on the merit of the album because I know for sure I was not like Pip in Great Expectations, there were no benefactors out there, at least not at first. The album charted number 4 on the U.S. Roots Blues Chart (it has since returned 4 times over the last 3 years, a very uncommon feat.)

His second album was a collaboration between he and UK harmonica master Keith Carter, entitled THE LAST COUNTRY STORE, which also received immediate critical acclaim and massive radio airplay, leading some critics to coin them the best new acoustic blues duo in America. The album was a staunch return to what Sunshine Sonny Payne, legendary King Biscuit Time radio host, says in reference to the two, as the real deal. The album was featured on many blues charts internationally and in America, reaching number 22 on the National Living Blues Chart (Living Blues Magazine) where it sat happily amid albums by many artists with management, publicists, radio promoters, and record label money behind them. The two toured Italy in support of this album in the summer of 2006 and were a resounding success, playing in front of welcoming crowds and making the great country their new favorite place to play. I cannot say enough about Italia and its people. I will return to Italy anytime that I can. The love was that strong!

I just always felt this type of music, roots oriented, real music, was my domain. I was born into this. Our culture here, my culture, is a very rich thing when you get into it. McKnight grew up in a farming community in the Western region of Tennessee (Gibson Country), which sits on the cusp of the Mississippi Delta and spent time with family in Memphis where Blues and Soul abounded. This kind of music was all around me growing up. I was also blessed with some cool relatives that let me go places I probably should not have been going. It was basically a no-brainer being that I can now drive 30 minutes or an hour and be sitting where some of the most influential men to ever make music sat and did their thing. This connects you to them in a way and reminds you that there is no faking it. You can't just copy them note for note and you can never walk in their footsteps. The Blues is not a museum piece! There are those that would have you think this. But it's not. Of course most of the people, who hold this opinion, don't know a damn thing about it anyway. They just think they do cause they read some books and saw a couple of films. You have to seek what the old people sought because it will come out right if you are receptive to it.

McKnight subsequently made many trips to Mississippi and Arkansas making many friends and contacts. I basically lived down there for a summer and really got a better feel for where I needed to be musically. I played with tons of great musicians I had no idea existed and all the experiences have deepened me and kept me on track. Given me new vision about the things I want to do musically.

McKnight writes about real experiences, which are obviously personal, and at times down right funny if not for their intensity: bad times, bad relationships, old times, leaving songs, and coming back songs are themes he reaches in very bluesy yet unique ways. I basically just be me and spit out the things in me. This is just my way of doing. The new album, entitled SUPA GOOD, will feature a return to the intensity of his debut album and will include performances from legendary Blues drummer Sam Carr. I just think it is important to include someone like Mr. Sam in this because not only is the man a great drummer he is probably about as true of a link to the past as we have left here with us. McKnight's aims are as pure as his understanding of his musical heritage and the new work will step back first and then leap forward. There are going to be some surprises on this baby. To me it always has to be real and something true. At best an artist can mirror the things around them and at the same time take all there is on the inside: influences, experience, passion, fear, pain, joy, all of it and let it lose. Holding nothing back is basically the ethos.