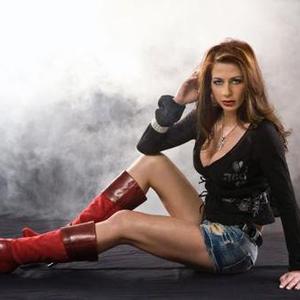 Are you ready for ROCK? 2004 was the year we first heard from ELA: Sony/BMG released ?Out Of My Universe', ELA's debut CD with her former band Com'N'Rail. This was followed by numerous concerts, nationwide support shows in Germany ? and then in 2006 the split between lead singer ELA and the formation Com'N'Rail occurred. Her solo debut album ?Passion' came out in June 2008 on ?NoCut' (Twilight/ Soulfood distr.

2004 was the year we first heard from ELA: Sony/BMG released ?Out Of My Universe', ELA's debut CD with her former band Com'N'Rail. This was followed by numerous concerts, nationwide support shows in Germany ? and then in 2006 the split between lead singer ELA and the formation Com'N'Rail occurred.

Her solo debut album ?Passion' came out in June 2008 on ?NoCut' (Twilight/ Soulfood distr.) and clearly transmitted ELA's message: that her true calling was music ? just like the CD title so aptly states. In listening to the brilliant and well-arranged songs of her solo CD the many good reviews and positive media feedback also proved the artist right. Once the album had been released, everything picked up speed: the first single ?Little Lies' made it onto several radio playlists, and stayed on for several weeks. For the second release, the single ?Bleed', a video was done. Not just your average music clip, as it was shot on a castle and hence had a mystical touch to it. Quote ELA : ?I'm a huge fan of castles, and it was my utmost wish to film on the historic grounds of a fortress. Just the masonry is ever so fascinating, and for a song like ?Bleed' I couldn't have imagined any other location?.

Then, a local newspaper that had also reported about the filming for the video clip ?Bleed', decided to ask their readers in an online poll, which song off of the album ?Passion' would be their favourite summer tune. Once all songs were online readers unanimously voted the track ?Out Of Time' as their hit candidate (Let me get back to you about this, later.)

Those who know ELA, are also aware that she is fuelled by a restlessness, and a desire for constant progress. That's why, in summer 2008, ELA presented her song material in a much rockier arrangement, a heavier fashion. Says ELA: ?The atmosphere in a studio is different to the one on stage, where you're being swept away by the energy of your fans. Before you pick a song for an album, you work for weeks on that tune until it is to your perfect liking. However, and I think I speak for many of my musician colleagues here, after a while you may dislike this song and/or you suddenly get new ideas for it. Music has a lot to do with emotions, so I think that your own feelings play a major role here. When you know that you're due to play live shows, it gets you in a different mood, you feel changed. I can only speak for myself, but I felt an overpowering urge to bring these songs across way harder ? well, I guess, I simply wanted to ROCK more?

But not only was the live segment due for a change?
When ELA heard an instrumental piece by Juergen ?JR' Blackmore during a radio interview in Hamburg, she was absolutely smitten by the way he played the guitar. It was the same day she got news from her record label that ?Out Of Time' was chosen as a summer hit song in an online poll (I told you I'd get back to you on this one).
Suddenly a light bulb went on. ELA, whilst in the radio studio, knew she had to work with guitarist Blackmore for this song and ask him. Planned in this minute, put into action in the next: that's ELA!
Upon returning home that night, she wrote an e-mail to Blackmore, he said yes and only two weeks later an even more personal style had been added to the upcoming single ?Out Of Time'.

The result was released October-17, 2008 in the form of a ?Out Of Time' special EP featuring three further brand new rock tracks: ?Dynamite', ?Mad About Your Love' plus a version of ?Queen of the Deep', originally by British hard rock band UFO.

ELA's record label NoCut was so delighted by the collaboration between ELA and Juergen ?JR' Blackmore, they decided to produce a video clip ? shot in legendary rock club Headbangers Ballroom in Hamburg ? in adequate rock manner. Juergen ?JR' Blackmore was impressed by rock lady ELA (she's true to her song like ?Dynamite' on stage), and he agreed to accompany her on the extensive promotion tour, they gave interviews for press, radio and TV. The video clip ?Out Of Time' and ELA was played on many German music channels such as iMusic1 TV, Hit24, Deluxe TV and Streetclip.Tv. Again, reviews from print and online media for ?Out Of Time'-EP were more than satisfying: the EP scored an average 8 of maximum 10 points!

But clearly, this couldn't be the end of it: Driven by ambition and progress ? as we all know ELA now ? she spent her time not just giving interviews, but she went into the recording studio yet again! Quote ELA: ?Yes, the last couple of months may have been strenuous, but they were also truly rewarding. It was a lot of fun to drive from one radio or TV station to the next and take all the impressions in, but mostly I was extremely happy to receive so much encouraging feedback to my music, and this honestly gave me a lot of power, which you can all discover in my latest creation called ?Make My Day'.

All too true!
In the meantime, record indie ZYX Music had by now become aware of ELA, and they picked one of her songs for a CD sampler released on their sub label ?RockUP'. Impressed by ELA's new album, they right away made the K-Town resident an offer she simply couldn't refuse. As a result, early this May 2009, ELA's new baby ?Make My Day' is due to be released by RockUP/ZYX Music.
The recent CD convinces with first class songs such as ?Who', ?I don't Mind' and ?Love'. These are classic rock arrangements and stunningly rich vocals, emphasized by a modern wall of sound, that features versatile sometimes even metal-like guitar riffs. ?Right For The Devil', for instance, is an ingenious track, you ?see' it performed live at once ? a pure blast for fans of Head banging. ELA shares her feelings with us all along the line, and this is what makes her voice so expressive and stirring throughout the album. But where there is bona fide rock, a heart wrenching ballad is an absolute must: ?When Love's Gone', is sung remarkably and so touchingly it hits you like a hammer and then breaks your heart. And off to the next one ? with songs like ?Rise To Fall' and ?One Wish' and our motto:

Are You Ready For Rock?