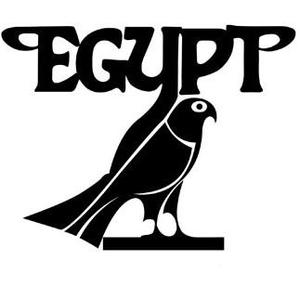 There are three bands and one soloist listed using this name. 1. Egypt (US) Egypt is a 70's influenced hard & heavy psychedelic stoner doom 3-piece hailing from Fargo, North Dakota. The band started in 2003 and in 2004, recorded a Self-Titled demo in their practice spot and it became the demo that wouldn't die. Lyderhorn Records decided to remaster and officially release the demo in vinyl form in 2008. Egypt is inspired by and will appeal to fans of Sleep, Sir Lord Baltimore, Deep Purple, etc.

1. Egypt (US)
Egypt is a 70's influenced hard & heavy psychedelic stoner doom 3-piece hailing from Fargo, North Dakota. The band started in 2003 and in 2004, recorded a Self-Titled demo in their practice spot and it became the demo that wouldn't die. Lyderhorn Records decided to remaster and officially release the demo in vinyl form in 2008. Egypt is inspired by and will appeal to fans of Sleep, Sir Lord Baltimore, Deep Purple, etc.

The Early Years.
Egypt's original line up first got together in a squat in Shepherds Bush, London in late 1987, but the story really begins a few weeks before when bass player Alan Fish and our first drummer Peter Chichon met at an audition for another band which included Don Greer (ex-Bachman Turner Overdrive and others). Don would later fill in for a broken-thumbed Eric Chipulina whilst Egypt were in the US for a short while in the early 90s. Alan, who had recently left Dumpys Rusty Nuts, had played since the mid-seventies with the legendary Tony TS McPhee in The Groundhogs, Terraplane, & Tony McPhee's Turbo, recording several albums. He later joined Tredegar (with ex-Budgie members Ray Philips and Tony Bourge) and was involved in many other projects including a European tour with Chuck Berry and a couple of albums with ex-Bo Diddley harp player Billy Boy Arnold. Around that time Peter Chichon had been drumming for London glam rockers The Gunslingers and had already played in bands with Eric Chipulina who joined soon after. Eric had until that time been gigging around London with Periphery (with Bill Kruse & Francis Pecino). On vocals from Peter's old band Shattered in came Ryka. This line-up barely stuck together long enough to record the first album (produced by Paul Samson) in 1988 and do a couple of brief UK tours of mostly pub and club venues. The music at this point was a mixture of Thrash with older Metal styles along with several other things including North African/Andalusian influences, hence the name Egypt. It was suggested by the record company HTD (now Talking Elephant Records) after they heard us play Find A Way, which eventually ended up on our first album. We weren't too sure about the name but no one could think of anything better, also the pub was going to open any minute so we thought 'what the hell', and left it at that. The first to leave was Ryka closely followed by Peter, who eventually joined Breed 77.

The Wilderness Years.
The year or two immediately following that first line-up is a blur of drummers and vocalists, many of them friends helping us to keep the band going. Eventually Alan & Eric took over on vocal duties and played blues and rock & roll numbers, many of which Alan knew from his days with Chuck Berry. With the help of various friends including Dick Wilson (later in Endangered Species) the band managed to keep on gigging, sometimes under the name Rhythm & Greens, and in time Eric started to do more vocals, eventually becoming the main vocalist. This was the beginning of the transition to the band that we are now, in that the circumstances forced us to stay as a three piece, handle the vocals ourselves and go back to our roots in a more blues/rock format.

The 'Hogs Years-pt I.
One thing that very much re-enforced the direction we were going in was joining (or in Alans case rejoining) The Groundhogs around 89/90. By this time we had found a drummer in Chris Bennett (from original Iron Maiden vocalist Paul Dianno's band). All three of us went into The Groundhogs and continued gigging as Egypt as well (including a couple of months in Dubai!) until some time in 91 when Chris left. More of our drumming friends again helped to keep Egypt going until the summer of that year.

The Present Line-up.
In mid 91 Peter Correa who had already played in bands with Eric Chipulina in the dim and distant past decided to uproot from his (and Eric's) native Gibraltar and take the plunge with Egypt. This is probably where the band as it is now started, eventually recording Preserving The Dead in 94 for HTD Records . This is the CD that most of the original stuff we played live over the next few years came from.

The 'Hogs Years-pt II.
It would have been around 92 or 93 that all three members one by one joined/rejoined The Groundhogs, now and then gigging in Italy, Germany and elsewhere in Europe, apart from the regular UK circuit. This line up can be heard backing Tony McPhee on the Groundhogs album Lost Tapes II, recorded live in Milan around 94ish (if I remember right) although it was not released until several years later. Again both bands were going at the same time and several occasions saw Egypt doing an opening set at a Groundhogs gig.

The 'Hogs Years-pt III.
Around 96 Alan left The Groundhogs and Eric switched over to bass (initially for a couple of German gigs but in fact for about 3 years). This line-up recorded the CD Hogs In Wolf's Clothing and a video Live from The Astoria London both in 98,and another CD The Muddy Waters Songbook in 99. Towards the end of 99 Eric and Peter left to concentrate more on Egypt which had been pushed aside to a certain extent.

Y2K.
Around about the end of 99 they started to concentrate much more on Egypt & things slowly but steadily progressed over the next few years. In early 2003 Alan went to Spain for a few months to work with ex-Uriah Heep keyboard player Ken Hensley and ex-members of Wings and AC/DC. Soon after this a long overdue new CD Midnight Sun was recorded at Purple Studios in Norwich & released mid 2004 on Blues Matters Records.

The Present.
More recently gigs are being booked further afield in the UK with dates abroad in the offing & with regular gigs in Spain already under their belts. Also on the cards are the re-release of the second & third albums (Preserving the Dead & Midnight Sun) & the recording & release of there next & fourth album, the first for Stable Records.

A very obscure Swedish death metal band. It was a side project of Janne Rudberg (Excruciate (Swe), Exhumed (Swe), Morpheus (Swe), Mastication, Birch Mountain). They recorded a 2 song demo in Sunlight Studios in 1992, leading to an album deal - but the album was never recorded. The name was an acronym for Eternity Gardens Your Psychotic Tendencies, as well as a reference to the country.

4. Egypt (UK)
Souflul, British urban sensation Egypt, is best known for her funky house hit "In the Morning (Let Your Love Come In)". Egypt is also a fashion designer and debuted her line, Eveae West, at the 2011 London Fashion Week.