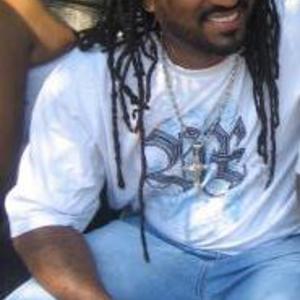 An encounter with Ed Robinson is an encounter with one of Reggae music's most consistently great contributors. Throughout the course of his over twenty year career Mr. Robinson has blessed the music industry with his talent both before the mic and behind the scenes. Having started his career as the drummer in a rock band, Ed Robinson gave hints of his versatility from the very beginning. Over the years he found himself becoming a key player in the diverse genres of Reggae, Rock, Soul, Hip Hop, and R & B.

Having started his career as the drummer in a rock band, Ed Robinson gave hints of his versatility from the very beginning. Over the years he found himself becoming a key player in the diverse genres of Reggae, Rock, Soul, Hip Hop, and R & B. His tremendous production talent has found him at work with industry greats like Luciano, Maxi Priest, Buju Banton, Shabba Ranks, Super Cat, Snoop Dogg, Warren G and the incomparable Dennis Brown just to name a few. While constantly at work in the studio, Robinson still found time to perform in such great stage shows as Reggae Carifest, Irie Jamboree and Sunsplash. It was during a performance at Sunsplash concert that he caught the attention of MCA Records.

His first album Once Again was ultimately released by VP Records and contained the highly acclaimed track ?Knockin' on Heaven's Door?. A second album, Sky is the Limit, was released on Jet Star Records featured powerful Roots tunes like ?Bad Minded People?, ?Skin I'm In?, and a fine version of ?Burnin' and Lootin'?. Fans are now primed and ready for a new release from Mr. Ed Robinson, and he does not disappoint. After the very successful single release last year of ?Ain't That Lovin' You?, his cover of the Lou Rawls' classic made popular by Dennis Brown, he is blessing us with a 14 song album that is full of classic rhythms and lover's lyrics.

Solitude is that rare album that is made for listening. The steady grooves are perfectly complimented by his melodious voice making this album a must-have for the true Lovers' Rock aficionado. From the first amazing track, ?No More Mr. Lonely?, to the last, his beautiful cover of the Luther Vandross smash ?Dance With My Father? which features the giggles of his son EJ, this album keeps you on lock. ?Fun Time Again?, a song pleading for a return to the fun and peaceful times in life, was featured in the Jamaican comedic stage play Passa Passa. ?So Real? is an incredible song with a jazzy groove that will find itself well-requested by lovers everywhere. The album features a few other well executed covers like, Mario Winans' ?Don't Wanna Know? and Simply Red's ?Holding Back the Years?. ?Can't Stop It? and ?Cry Blood? give a nod to the Roots Reggae massive with two outstanding tracks for the people. Solitude is an album that will soon find a permanent spot in your CD changer, on your MP3 player and in your heart.

Some say the third is a charm, but The Awakening may prove that the fourth is as charming as they get. This album sits squarely on the fence between Roots Reggae and Lovers Rock and represents another start-to-finish ear pleaser. The first single to be released, ?I Can't Go On Prentending?, is a special tribute to love and honesty that guarantees Mr. Robinson a spot on every smart DJs playlist. Its heartfelt confession will ring true to every man who ever felt he couldn't admit his feelings. ?Get Up and Dance? is an up tempo reminder that we'd better make time to enjoy the music and live our lives because life is short. The message in both ?Stand Firm? and ?Never Give Up? tells listeners to hold the faith because ?Jah is in control? of everything. His vocal style in ?Let Me Be the One? ranks with Reggae's best crooners and a serious horn section lends this track a vintage feel. In the tradition of conscious Reggae music this album is grounded in love and strength. The production on The Awakening is smooth and shows the experience of a tried and tested musician.

In a Romantic Mood

Only Time can tell