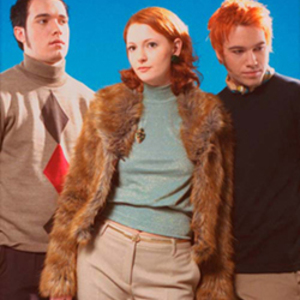 Echo Image (stylized "echo !mage") is a synthpop band from Norway. The band unofficially started in 1997 when Pal Magnus Rybom started experimenting with electronic music. Later that year Fredrik Hansen joined and Echo Image was officially formed with Trine Bilet joining towards the end of the year providing backing vocals and keyboards. Bilet is featured on the front cover of the Endless Day EP. They were most active between the late 90s and the early 00s.

In 1998, Echo Image recorded the Walkout EP, which was sold locally through a punk/prog label called Kvarts Musikk. Their musical style didn't really suit Kvarts, so in 2000 they signed to US synthpop label A Different Drum. Around this time Lars Kristian Holt joined as live guitarist.

The 2000 single Need To Be Proud was mixed by Apoptygma Berzerk frontman Stephan Groth, who introduced them to the Norwegian label Hard:Drive. After releasing Compuphonic simultaneously on ADD and the now defunct Bloodline in Europe, they signed with Hard:Drive and released the Endless Day EP. Echo Image accompanied Apoptygma Berzerk on the Harmonizer tour in 2002.

The members of the band are currently Pal Magnus Rybom, Trine Bilet, and Lars Kristian Holt; Fredrik Hansen left the band in 2004, but is in contact with the band in regards to joining again.

In July 2010, a new demo song, "Things I know" was released to Youtube, along with a new interview of P?l Magnus Rybom who mentioned that he is working on a new Echo Image album.

On 1 October 2010, Echo Image played a live concert at ElektroStat.

Need To Be Proud (MCD)