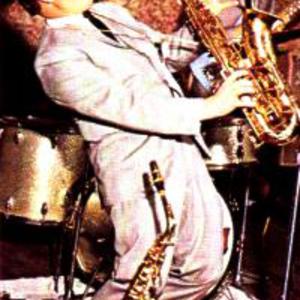 Ace Cannon started his career in Memphis, Tennessee, recording on many of the 1950's hits on SUN RECORDS. Says Sam Phillips, quote: "Ace Cannon is the greatest saxophone player who ever lived, but then he came out of the same stables as Carl Perkins, Elvis, Jerry Lee, Bill Justice, etc." In 1959 he started with the BILL BLACK COMBO, (which was one of the most popular instrumental groups of their era,) in the U.S.

and the Bahamas, where he traveled on all concert dates and played the lead saxophone on all the original recordings. They appeared on the most prominent TV shows of that era, including The Ed Sullivan Show, The Merv Griffin Show, Dick Clark's American Bandstand, and The Buddy Dean Show in Baltimore, MD.

In 1962 Ace recorded the instrumental smash "TUFF". Since that time he has recorded 52 albums and 37 singles. The kind that gets nominated for Grammy Awards such as his recording of "Blue Eyes Crying In The Rain," million selling TV albums such as "Golden Classics," "The Entertainer" and when paired with trumpeter legend Al Hirt resulted in a historic duet TV album of country classics that could be one of the biggest TV albums in history.

In 1986, he performed on The Class of '55 album which brought together Jerry Lee Lewis, Carl Perkins, Johnny Cash and Roy Orbison for a first. This led Ace and Carl Perkins to perform together for the entire year of 1986, playing show dates all over the U.S., and a tour of Norway, Sweden, and Denmark, and the World's Fair in Vancouver, British Columbia.

Presently considered one of the top artists for TV sales, Ace Cannon has made numerous appearances on "Nashville Now", "New Country", Charlie Daniel's Jam", and "Fan Fair." He has traveled far and wide appearing at concerts, clubs, fairs and major festivals. Also in 1986, he was asked by Dick Clark to join the All Star Band for the Country Music Academy TV Special.

Ace is considered a musical genius even as far away as the Caribbean, where more than 10,000 people recently showed up for two sold-out shows at The Spectakula Forum in tiny Port of Spain, Trinidad. This has been the main reason Ace was asked to return on at least a dozen tours in the Caribbean which included the islands of Barbados, Trinidad, Tobago and British Guyana, South America, Hamilton, Bermuda since 1975.

Ace Cannon has appeared as either a solo artist or with a full band. He is an artist that is on the rise again. His wide and varied repertoire contains everything from rock and roll to country standards to pop, and he is also no stranger to jazz and blues, which makes his music appeal to audiences of all ages and musical preferences.

The 1990's have been great for Ace as he has recorded two new CDs for WIRL records located in Barbados, entitled Music For Lovers, and Sweet Dreams. They have also been distributed in the U.S. with tremendous response. He has also overdubbed his terrific horn on some record tracks on the late and great Ivory Joe Hunter.

In 1997, Scotty Moore and D. J. Fontana, two of the original Elvis Presley Band, recorded an album entitled All The Kings Men, which consisted of 11 songs by various artists, such as Keith Richards, Ron Wood, Jeff Beck, Steve Earl, Ronnie McDowell and The Bill Black Combo. Of the 11 songs on the record, The Bill Black Combo selection was nominated for a Grammy Award. This was an exciting honor for Ace, as this was a group he started his career with, 40 years ago.

Raindrops Keep Falling On My Head & Other Favorites (Remastered)

Blue Eyes Crying In The Rain

The Long And Winding Road