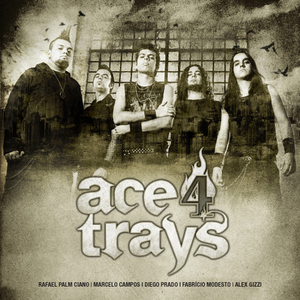 S?o Paulo city, cradle of several Brazilian bands, gives birth to another creation: Ace 4 Trays. The quintet formed by Diego Prado (Vocals), Fabr?cio Modesto (Guitars), Alex Gizzi (Guitars), Rafael Palm Ciano (Bass) and Marcelo Campos (Drums) has been playing on Brazilian stages showing their authorial work, mixing a myriad of influences. The band's proposal has always been to compose without being attached to labels established by the critics, to use in their favor a variety of possibilities and create their own style.

The band has been together since 2007, and since then they have been playing steadily. In July,
2008, their first EP was released, with the band's name. In it there are four tracks: ?What Do You
Want From Me?, ?Heal My Soul?, ?Behind the Wall? and ?Love is Gone?. With this CD, they received
an excellent feedback all around the world through the internet e later, from the especialized media.
Among them, the band was the highlight at the ?Garage Demos? section in Roadie Crew magazine
(issue #119).
In the same year, Ace 4 Trays performed in several festivals around Brazil, including being the
champions of ?Rockaholic Festival?, promoted by Blackmore Rock Bar in S?o Paulo.
The band just released their first album, named ?Roll The Dice?, and is booking dates for a tour,
promoting their new work.
CONTACT:
55 11 7328-5867 / 55 11 9585-9915
ace4trays@gmail.com - www.myspace.com/ace4trays