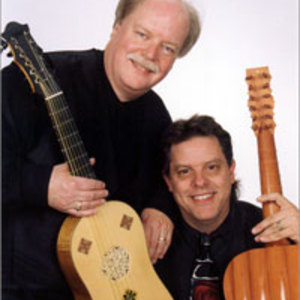 Formed in 2003, Duo Chambure is named for the "chambure" model vihuelas da mano used by Edward Martin and Philip Rukavina to perform music from Renaissance Spain, including Valderrabano's duets. The duo has performed numerous times throughout the United States, most recently appearing in concert at the lute Society of America 2004 Summer Seminar, held at Case Western University in Cleveland. As individuals, Edward Martin (soprano, alto, and tenor vihuelas) has performed and taught lute extensively throughout the United States, and he teaches lute at the College of St.

Scholastica, where he holds the position of Adjunct Professor of Lute. He has other recordings on the Magnatune label.

Phillip Rukavina (tenor and baritone vihuelas), studied lute with Patrick O'Brien at Sarah Lawrence College in new York and with Hopkinson Smith at the Academie Musical in Villecroze, France, and in Basel, Switzerland. Phillip appears on several CDs on the Lyrichord label with the ensemble Minstrelsy! and with the Venere Lute Quartet on "Sweet Division", released in 2003 by the Lute Society of America. Phillip supplied the solo lute music heard on the High Bridge audio tape release of "The Last Unicorn" as read by the author, Peter Beagle. Phillip teaches privately in St. Paul, Minnesota