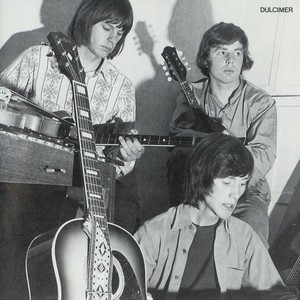 Originally formed in 1967 as Kelpie, Dulcimer consisted of Dave Eaves and Pete Hodges on vocals and guitar, and bassist Jem North. They were originally discovered playing in a Cotswold, Worcestershire restaurant by the British actor Richard Todd in 1970, and subsequently signed by manager Larry Page (yes, the guy who was behind The Troggs), at that time in the process of setting up his own label Nepentha Records.

The trio debuted with 1971's oddly titled "And I Turned As I Had As a Boy" produced by Page and released on Nepentha (Mercury acquiring American distribution rights). Best described as acoustic folk-rock, it attracted favourable reviews for its intriguing blend of English folk (including several references to the group's local Cotswolds environment) and varied instrumentation. Melody Maker magazine, in particular, was effusive, comparing the duo favourably with Simon And Garfunkel. The album additionally featured Richard Todd reading poetry on two of the tracks. It sold well in the USA, Europe and Japan, and the group embarked on recording sessions for their second album, a more rock-orientated affair. Though artwork and packaging were completed, the album was never released, and Eaves and Hodge returned Dulcimer to a semi-professional footing thereafter.

A further small-label album was issued in 1980, A Land Fit For Heroes, jointly credited to local writer Fred Archer who appeared on the recordings. Afterwards Eaves concentrated on his furniture business and Hodge on landscape gardening. "Jem" North returned to driving lorries. However, due to residual interest in Dulcimer, the central duo reformed the band in 1993 to enter the studio once again. When A Child ... was released on President Records and returned to the group's evocative rural style. This was followed by a second "comeback" set in 1995, Rob's Garden, recorded at their own "cottage studio". As with each of their earlier releases, there was a strong undercurrent of literature in this project, "Creation - The Poet And The Fire Bird" concerning a meeting between Igor Stravinsky and Dylan Thomas.