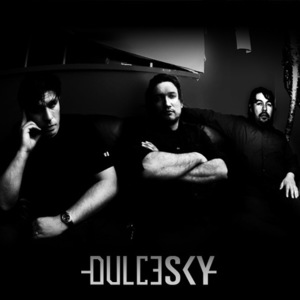 In this age of instant gratification and music-as-commodity, the "album" seems like a lost art. However, true music lovers know that a thoughtful, coherent album provides a deeper, far more satisfying listening experience than the piecemeal playlists of today's attention deficit-addled pretenders. DulceSky clearly understands this. Their debut LP, Lands, is a testament to the kind of care and attention to detail that separates the musical wheat from so much vacuous chaff.

DulceSky clearly understands this. Their debut LP, Lands, is a testament to the kind of care and attention to detail that separates the musical wheat from so much vacuous chaff. Years in the making, Lands is a confident, accomplished statement of intent: DulceSky creates a world in which listeners can be happily and longingly lost.

Perpetuating the British independent music tradition that saw bands like Cocteau Twins and Felt release some of their best work on EPs, DulceSky recorded two shorter, self-contained works of their own early in their career. The Film (2003) and Media-Luna/Half-Moon 2004) EPs were neat missives on the state of the band that created a certain aura, but Oliver insists that they weren't made to fulfill some grand design. "Every time we released an EP, it was an attempt to start recording an album," he recalls. "But things never really worked out to keep recording in the same environment we started." Lands proves that the EPs were a necessary stepping stone to what is hands down the band's most accomplished work to date.

Like the best dream pop, the new album is teeming with energy while simultaneously projecting a serene, almost floating vibe. Beginning with a literal pulse and culminating in an epic, cathartic release, Lands plays like a symphony-a unified work with a definite trajectory and plenty of standout moments. The sound is familiar to the initiated: shoegaze guitars, memorable melodies, and powerful drums are at the forefront. But beyond the obvious, colors emerge like gleaming fireworks slowly fluttering to the ground. Songs like "Half Moon" and "I Dreamt of You" are painted with icy synth patches and delicate backing vocals. Subtle beat programming often segues one song into the next, contributing to the album's unified feel. Ever present are Oliver's ethereal vocals, Daniel's strong bass lines, and the deft production touch of Matt Winegar.

Growing up in Santiago, Oliver listened to the Beatles records his dad played, and later, through late night radio and TV shows, he was exposed to the sounds of British innovators like Catherine Wheel, Pale Saints, the House of Love, and Ride. These bands' powerful, melodic sounds captivated Oliver and planted a seed that ultimately bloomed as DulceSky-but not before a series of twists and turns uprooted Oliver and brought him into a new world.

It seemed as though he suddenly awoke one morning to find himself in America, where he would have to learn to speak English, get an education, and earn a living. But Oliver's journey was not so simple, encompassing Santiago's alternative music scene, the varied climes of Argentina, several stops and starts due to lineup changes, marriage, and the births of two children. It involved recruiting family members to DulceSky (brother Daniel and wife Dannika) to provide stability to a floundering lineup and stumbling across the perfect drummer from a Latin/Rock band. In addition, it saw the semi-retirement of Dannika and the fortuitous addition of Leigh Hendrickson.

Listeners familiar with DulceSky's history (and the lucky few who have heard Oliver's first band, Subdroides-check the Spanish-language highlight "La Huida") will recognize reimagined and revitalized versions of a few classic tracks from the band's EPs on Lands. Slowly, as the new album unfolds, the vision Oliver had for the band from the beginning comes into focus. The songs about waking up in strange and faraway places, both physical and astral, and wondering at experiences far flung and whisper-in-your-ear close have reached full flower. In so doing, the realization sets in: DulceSky's winding journey across continents, languages, and cultures has been more than worth it.