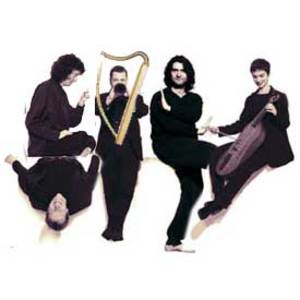 The Dufay Collective was formed in 1987 to explore the rich and varied repertoire of the Middle Ages and Renaissance. They are a group of musicians who work together, as their name implies, without a director. The highly successful 16 years since its formation have taken The Dufay Collective on tours throughout most of Europe as well as further afield. They have toured extensively in the Middle East, India, Hong Kong, Australia, the US and Latin America.

The highly successful 16 years since its formation have taken The Dufay Collective on tours throughout most of Europe as well as further afield. They have toured extensively in the Middle East, India, Hong Kong, Australia, the US and Latin America. At home The Dufay Collective has appeared in numerous concert series and festivals around the country, and has given sell-out concerts at London's main concert halls.

Highlights of recent years have included performances in the monastery of Montserrat, Early Music Network tours in Holland, Norway and the UK, the Tallinn Festival in Estonia, the Festival de Fez in Morocco, and regular concerts in Spain. A return to Australia as part of the Sydney Festival was well received, as was a series of concerts in Singapore. They have taught popular workshops and concerts at Dartington Summer School for the past eleven years. In May 2000 the Dufays featured live on BBC2's ?Perfect Day' broadcast. A collaboration with The Orlando Consort on music from the time of Boccaccio's Decameron and concerts in Canada and the USA were features of 2002, and in the Autumn the group traveled to Denmark to perform and run workshops in the Ribe Festival, and performed at Sadlers Wells with the Richard Alston Dance Company. More recent UK concerts include the York Early Music Festival, Leamington & Warwick, Lichfield, Poole, Ross-on-Wye, Birmingham Early Music and Cambridge Summer festivals. The group's recent work in Spain includes a number of performances in Burgos and they were the first to perform in the new festival in Rueda.

The group has broadcast on many radio and TV networks around the world as well as working on a number of TV and film projects, including Zefferelli's feature film Hamlet, The Affair of the Necklace and A Knight's Tale. Their CD's have all met with critical acclaim, releases for Chandos Records including a range of repertoire from medieval Europe, the early Spanish renaissance and popular music from 17th century England. The Dufay's latest recording Cancionero was nominated for a Grammy Award 2003, and was voted one of the CDs of the year in Gramophone Magazine. 2004 sees the release of their next recording, including the famous ?Cantigas d'Amigo' of Martin Codax.

Note: also found in Last.fm under name of The Dufay Collective.