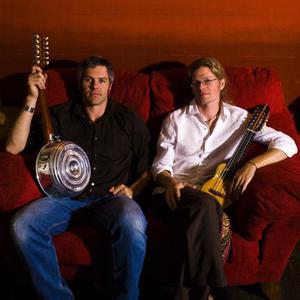 Originally birthed in Athens, GA in 1999, Dromedary has been spreading their unique brand of improvised "world music...whatever that means" all over the world since then, having played over 600 shows in North America and Europe over the last 9 years. The last two years have marked a major change for Dromedary, as co-founder Reissiger moved to California, and percussionist Louis Romanos (aided by the winds of Hurricane Katrina) moved to Athens.

The last two years have marked a major change for Dromedary, as co-founder Reissiger moved to California, and percussionist Louis Romanos (aided by the winds of Hurricane Katrina) moved to Athens. Always lightweight travelers, Dromedary continues to travel back and forth for short tours. And though a coast-to-coast move usually marks the end of a band, ?Dromedary is too good to give up,? says Reissiger, and McMaken adds, ?I think we're in it for the long haul, regardless of where we live.?

Percussionist Louis Romanos and McMaken (the other co-founder of Dromedary) established their musical kinship in New Orleans in the mid-1990s, and this was easily rekindled when Romanos relocated to Athens a few years ago. Though primarily a jazz drummer (one of New Orleans' finest), Romanos constructed an eclectic set of hand percussion to fit into Dromedary's sound. ?Honestly, my time spent with Louis in New Orleans listening to live music and playing together was what made me the musician I am today,? says McMaken. ?It is an honor to get to keep playing and learning from him.?

Since the addition of Romanos to the Dromedary family, acoustic bassist Chris Enghauser has been brought into the mix as well. Originally from New Jersey, Enghauser arrived in Athens via Seattle and even Nashville, having played with jazz and bluegrass legends over the last few decades. ?Chris's playing clearly drives this record,? says McMaken. On earlier Dromedary releases, the lack of rhythm section gave the duo a certain freedom: they erased downbeats, alternated between rhythmic feels and played with instrumental conventions. ?We never thought it would be possible to bring in a bassist and drummer and have it still sound like Dromedary,? says McMaken ?but then we met Chris and Lou.? And it all made sense.

Live From The Make Believe