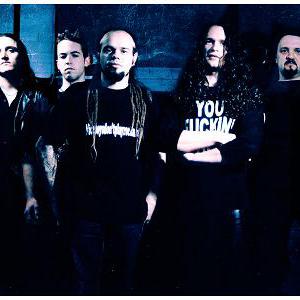 There is more than one artist with this name: 1) An Australian heavy metal group (1994-present). 2) A U.S. based experimental rock trio (1996-present). 1) Since their inception more than 15 years ago Dreadnaught have established themselves as a cornerstone for Australian heavy rock audiences. The city Dreadnaught call home, Melbourne Australia, has spawned several ?next big things? over the last decade.


1) Since their inception more than 15 years ago Dreadnaught have established themselves as a cornerstone for Australian heavy rock audiences. The city Dreadnaught call home, Melbourne Australia, has spawned several ?next big things? over the last decade. But as genres and bands come and go Dreadnaught never fail to provide their loyal fans, both old and new, with diverse offerings that are rooted in the brand of Australian rock and metal that the band have become an historic part of.

Before signing to Roadrunner Australia subsidiary Dark Carnival Records in 1999 Dreadnaught self-financed and released Body.Blood.Skin.Mind (LP CD - 1996) and Idiosyncrasy (EP CD - 1998). After the Dark Carnival signing Dreadnaught's next, ?Down To Zero? (LP CD - 1999), received critical acclaim, U.K., European and U.S. airplay, and was released in the U.S. and Europe through The Music Cartel.

2002 saw the release of an EP, ?One Piece Missing?, again through Dark Carnival. The lead song from this release, ?Pushed to the Limit? was placed on the high-rotation playlist of Australia's premier national rock radio station, TripleJ.

Headlining tours, high profile supports with Testament, Strapping Young Lad, Nickelback, Nevermore, Paradise Lost, and Cathedral to name a few, as well as slots on leading Australian metal and rock festivals have earned Dreadnaught the reputation as one of Australia's finest and hardest working live acts.

Dreadnaught again emerged from the studio in 2005 with their most powerful, intense and dynamically versatile recording to date. The resultant recording is of 11 massive raw rock anthems that make up ?Dirty Music? (LP CD ? 2005).

The following year Roadrunner Australia released a re-packaged ?Dirty Music? as a dual CD featuring different artwork, previously unreleased material from Body.Blood.Skin.Mind, Idiosyncrasy and the ?Dirty Music? sessions, as well as videos for ?Cut Throat Blues? and ?Pushed To The Limit?. ?Dirty Music 2? is both a fan must-have and perfect first foray for newcomers into the world of Dreadnaught.

May 2008 saw the addition of Matt Racovalis on drums. Matt brings a definitive metal edge and a high degree of technical ability to the band which is reflected in the results of the song writing process throughout 2008. This latest LP is departure from the more rock orientated releases of previous years and represents a return to the bands early thrash-metal roots and is the bands heaviest release to date.

2009 sees the release of Dreadnaught's latest self-titled LP CD which will is available through all good record stores, online via iTunes and from this website now.

2. After 6 albums on 4 international labels, more than a thousand shows across the US, armfuls of 'best of' awards, and more hooks than a tackle box full of musical lures, Dreadnaught has become a veritable institution. "Country-rock, avant-garde blues, prog-funk, experimental rock - any and all of these labels are accurate, yet each only begins to brush the surface of the band's style. Daringly different." (All Music Guide)

At once steeped in American tradition and yet thoroughly forward-looking - kind of like a can of Pabst Blue Ribbon hurtling through a wormhole, or a steel cage match at the local VFW hall on the moons of Saturn - Dreadnaught (bassist/composer Bob Lord, guitarist/composer Justin Walton, and drummer Rick Habib) has bended and busted rule after rule after rule with its music, and each album has always proved a galactic leap from the one that preceded. From the sunny groove-rock of DREADNAUGHT (1998) and the rustic, experimental UNA VEZ MAS (2000) to the earthshakingly progressive opus THE AMERICAN STANDARD (2001, Red Fez Records), the avant-garde tour-de-force MUSICA EN FLAGRANTE (2004, Big Balloon Music), and the double-disc LIVE AT MOJO (2005, Comet Records), Dreadnaught has displayed an obsession with "pushing the proverbial envelope right down the shredder" (Progressive World).

The passionate accolades haven't always been there, but the work ethic has: six, seven, eight nights of gigging each and every week of the year. National tours in rotten old Chevy vans. Rehearsals squeezed into any and all free moments. A LOT of Days Inns. Gigs with John Entwistle (The Who), Tony Levin (Peter Gabriel, King Crimson), NRBQ, California Guitar Trio, Thanks to Gravity, in opera houses, rough-and-tumble bars, and even a basement or two. And through it all, they've kept an overwhelming sense of fun, joy, and sheer love of the game.

Dreadnaught is also the house band for the New Hampshire Public Radio/Music Hall series Writers On A New England Stage, where they've shared the stage with Pulitzer Prize winner John Updike, Emmy winner Alan Alda, and best-selling authors Dan Brown and Mitch Albom. All shows are broadcast on New Hampshire Public Radio in front of a live audience at The Music Hall in Portsmouth NH.

In 2007, Big Balloon Music/Red Fez Records will release HIGH HEAT & CHIN MUSIC, a double-disc retrospective of the band featuring half a dozen new studio cuts and tracks from the band's entire catalog.