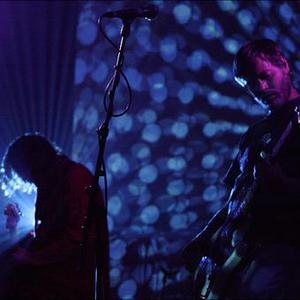 Dragontears is a psychedelic rock / space rock side project of the stoner rock based group Baby Woodrose from Copenhagen, Denmark. A recording only band headed by guitarist Lorenzo Woodrose which is quite far away from the usual heavy rock style here. Enlarged by members of the band On Trial they recorded their debut during one week between Christmas and New Years Eve in 2005 at the Black Tornado studio in Copenhagen.

This album named 2000 Micrograms From Home was offered in 2007 by Bad Afro Records and was originally concipated as a vinyl release only. Six cuts are included deriving from improvised jam sessions deep in hallucinatory psychedelia.

One year later they followed this path with the second release Tambourine Freak Machine. Once again you will detect all the ingredients what the genre is able to present - trippy spacey songs with hypnotic parts, a lot of electronica and experimental elements. Dragontears is a recommended project for fans of the genre which shows a retro as well as a modern approach.

Turn On Tune In Fuck Off!!

Turn On Tune In Fuck Off