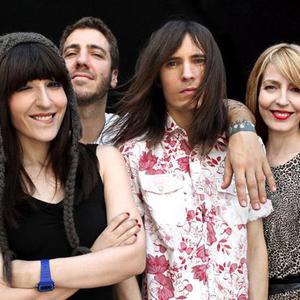 Dover is a spanish alternative-pop-rock band which was founded in 1992. The Band currently consists of the sisters Christina Llanos (guitar/vocals) and Amparo Llanos (guitar), Jes?s Ant?nez (drums) and Samuel Titos (bass) who recently replaced former bass ?lvaro D?ez. Their music is from heavy to sweet, shouting to dreaming, but always with a groovy drive. Dover originated in the outskirts of Madrid at the beginning of the 1990s when the Llanos sisters decided to form a rock band encouraged by the alternative scene from Seattle.

Dover originated in the outskirts of Madrid at the beginning of the 1990s when the Llanos sisters decided to form a rock band encouraged by the alternative scene from Seattle. In 1994, the drummer Jes?s Ant?nez and the bass guitarist ?lvaro G?mez joined in. One of the band's demo tapes reached the radio program Disco Grande on RNE Radio 3. The band then entered into a one-year contract with the small independent record label Everlasting-Caroline. Their debut album Sister in 1995 lacked promotion and sold poorly; however, the Spanish fanzine Mondo Sonoro included it among the 10 best national albums of the year.

After their initial contract expired, they signed for the independent label Subterfuge Records, which produced their second album Devil Came to Me. This album turned out as an unprecedented success in the Spanish independent scene. A fragment from the title song was included in a popular Radical Fruit Company television commercial and the band got launched to national fame. While promoting this album, the bass guitarist was replaced by ?lvaro D?ez, who had already been part of the band at its beginning. The album sold over 500,000 copies and gained them fans also abroad in Europe and the Americas.

Their relationship with Subterfuge Records deteriorated and they signed with Chrysalis Records. In 1998, the band created their own label Loli Jackson Records. The next year they recorded their third album Late At Night in Seattle.

In 2000, they received the MTV Europe Best Spanish Artist award. In 2001, Chrysalis re-released their first album Sister including a bonus unreleased song Noche Tras Noche. In September that year, after tense recording sessions in Los Angeles marked by disagreements with their album producer Barret Jones, the band released their fourth album I Was Dead for 7 Weeks in the City of Angels.

IIn 2003, they released The Flame, recorded in Spain and produced by Rick Will, an album that shows all the fury that has made them big without forgetting those great songs of melody and quality. Stephen Marcussen (Marcussen Mastering, NYC) did the mastering, a classic that has mastered a lot of the legendary records of the last 15 years.

In 2006 Dover released Follow The City Lights. It was recorded at PKO Studios and self-produced along with Daniel Alcover. The album was preceded by the single Let Me Out, and broke off from their usual sound to create a more dance-like style.

The band's 2007 release 2, is a greatest hits compilation, which exhibits the rock sound that brought them to stardom, as well as the band's new electronic sound.

The first single from 2is entitled "Soldier."

Devil Came To Me (Reedición)

I Was Dead For 7 Weeks In The City Of Angels