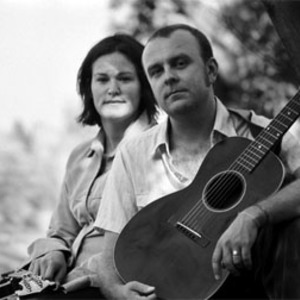 Doug and Telisha Williams hail from Martinsville, Virginia, where boarded up factories stand as monuments to how fast the world can change. When they write and sing songs about dying small towns, they know what they're talking about. The unemployment rate where they live is 20.2 %. When you hear them sing songs about a couple of hard luck kids who made some bad decisions and wound up in jail, you've got to remember that Doug & Telisha are still good friends with those kid's family.

The songs for their latest record, Ghost of the Knoxville Girl, weren't written by people who like to imagine what it's like ?out there,? instead they came from stories told across kitchen tables or between friends after a couple of pitchers at the Ten Pin.
?Seems like everybody we know is living what you read about in the papers,? says Doug. ?The unemployment is 20.2%, and we're all feeling a little desperate and pushed against the wall. This record couldn't help but echo what we're seeing and hearing. ?


Their hometown sits in the shadows of the Blue Ridge Mountains and you can hear, smell and taste that influence on their new record, Ghost of the Knoxville Girl. Like the very best singer-songwriters, this duo gives a voice to the struggles of everyday people, as well ghosts of the past. ?When we opened for Charlie Louvin and heard him sing his amazing Knoxville Girl,? says Telisha, ?I had to wonder about her side of the story. All I had to do was ask and she told us.?


Like the ghost in the title track, the characters in this collection of songs are resilient spirits who face their troubles straight on, never looking away. Telisha's voice rises from way down deep and delivers the honest truth with a frank clearness that never wavers. You never for one minute doubt that the emotion is real. Having played and written together since they were teenagers, Doug's guitar and harmonies follow suit giving soul to heart. And, when Doug takes the mic for his story songs, you can imagine Flannery O'Connor nodding in praise.
?We hope in some small way our songs not only document these times, but honor the people who are just doing the best they can to get by these days.? Doug says.
Making this album even more poignant is the fact that it was recorded in the duo's home town of Martinsville, Virginia. ?It was important to us to try and keep it local this time. Try and keep as much of it as possible close to home.? says Doug.


It has been over three years, hundreds of shows, and thousands of miles since Doug and Telisha released their last record, Rope Around My Heart. ?We had no idea Rope would do so well,? says Telisha, ?We loved the record, but getting it up on the Americana Music Association charts, getting the great magazine reviews, it was great!? Since then, they've traveled from Florida to Oregon and Michigan to Texas, they've played with some of their most beloved heroes - Lucinda Williams, Darrell Scott, Charlie Louvin, and Joe Ely ? and been on stage at Anderson Fair, The Birchmere, The Carolina Theater, Godrey Daniels, Madison Square Park and Floydfest.


Wherever Doug and Telisha go they always make quick friends with their audience, pulling them right into their lives. ?That's what it's all about for us,? says Doug, ?being out there, playing on the road, meeting people. Everything else is just... everything else.?


No matter how far they roam, Doug and Telisha always find their way back home. A place that holds tight to the intricacies and contradictions of life in the south today. A place where old time religion, superstition, rundown bars, gravel parking lots and boarded up factories tell stories that wind up being songs. A place where in just one set, Doug & Telisha can still send audience members to their feet in applause, to their knees in prayer, and back to the bar to buy another beer.

Rope Around My Heart