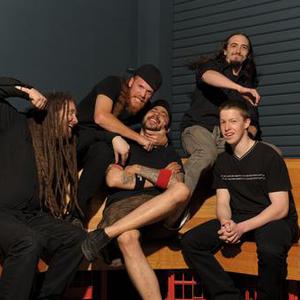 Double Dragon is an electro group hailing from France. They have provided the scores for both the horror films Last Caress (2012) & Blackaria (2009).

They have supported such bands as Slayer, Arch Enemy, Dark Tranquillity, The Black Dahlia Murder, Cephalic Carnage, and Mastodon, Soilwork, The Haunted, Carcass, to name a few.

They released their first full length, Sons Of Asena, in 2011 as a free download following much anticipation and a very positive response.

In 2012, following the departure of the last remaining original member, the band have decided to reinvent themselves under the new name Sons Of Asena with their album of the same name marking the end of an era and the beginning of a new one.

In more detail:
Double Dragon originally formed in 2002 when upon the demise of his previous band Screwface:13, guitarist Matthew 'Roady' Johnston decided to create a new project that focused more on melody than the down tuned style of 90's nu metal. After starting rehearsals with friend Danial Busch on drums, then bass player Jason Moon soon after, the three began writing material. Eventually they recruited Busch's long-time friend Shane Christford as their singer. After recording a two-track demo (unofficially dubbed 'Pirate Metal' due to its home-made skull and crossbones style artwork), Christford left the band during mid 2003 due to personal differences.

Whilst still searching for a replacement frontman in late 2003, they were joined by lead guitarist Ben Murphy, who had previously been a member of Adelaide hardcore?metal band Three Chain Break and death metal band Scorched Earth Policy before that. Murphy also later spent a brief period playing with Adelaide screamo band Hi End Audio.[citation needed]

Within two months of Murphy's addition to Double Dragon, the band were joined by ex The Undamynd frontman Lee Gardiner as their vocalist. With the lineup now solidified, Double Dragon performed regularly to local audiences, and in the latter half of 2004 recorded their first 5-track demo/EP "Have Them Destroyed" (a name the band considered before settling upon 'Double Dragon'), which was eventually released independently in January 2005.[citation needed]

In between a successful CD launch and beginning to tour interstate on a regular basis, the band continued writing material for their next recording. However, in August 2005 singer Gardiner was injured in a domestic house fire, suffering third-degree burns to both thighs and hands. During his rehabilitation period, the remaining members of the band began writing heavier and more aggressive songs ? some of which would eventually be lyrically based around Gardiner's injuries and the impact it had on the band. These would be the songs that made up their official debut EP Scars Of Fire, which was recorded from late 2005 to early 2006 with producer Ian Miller. Upon its completion the band was signed by Adelaide-based record label Truth Inc Records. Scars Of Fire was released Australia wide in June 2006.[citation needed]

Following the success of their debut EP, Double Dragon went on to headline shows Australia wide, as well as earning the opportunity to support international tours featuring bands such as Slayer, Arch Enemy, Dark Tranquillity, The Black Dahlia Murder, Cephalic Carnage, and Mastodon. The band also played on the Local Produce stage at the 2007 Adelaide Big Day Out.

In late 2007 Double Dragon began recording their next album Devastator, eventually released through Truth Inc Records in July 2008. Featuring ten tracks stylistically varying from traditional heavy metal, death metal, straight out hard rock as well as ballads, "Devastator" showcased the band's diverse appreciation for heavy music. Track seven, "Breathing Fire", featured additional guest vocals by Brisbane singer?songwriter Emma Dean. The album debuted at number one on the SAMIA Adelaide charts, and the band received a nomination for 'Best Metal Act' in a local street press magazine (dB Magazine) poll. The album's official launch show in Adelaide in July 2008 marked the farewell performance for lead guitarist Ben Murphy, who decided to leave the band to spend more time with his family. He was briefly replaced by former 'A Thousand Nightmares' guitarist James Cunningham, but eventually the position was permanently filled by 'A Red Dawn' guitarist Davin Buttery. In 2008 Double Dragon was the main support act for Australian tours by Swedish metal bands The Haunted and Soilwork, as well as opening for Carcass from the UK in Adelaide.[citation needed]

In December 2008, Double Dragon were mentioned in Blunt magazine's "25 Australian bands to watch in 2009".[citation needed]

On February 27, 2009, the band performed on the metal stage at the Adelaide leg of the Soundwave tour alongside Lamb Of God, In Flames, Devildriver, Lacuna Coil, 36 Crazyfists, Every Time I Die, Poison The Well, Evergreen Terrace, Unearth and All That Remains. Also performing at the festival were acts Nine Inch Nails, Alice In Chains, The Bloodhound Gang, The Dillinger Escape Plan and many more.

Double Dragon spent the latter part of 2009 playing at the annual Against The Grain metal festival in Adelaide, this time in its fifth year, as well as opening for U.S. metal bands Slayer and Megadeth around Australia on their October 2009 national tour. After supporting Obituary in Adelaide in November 2009, the band toured the country as special guests on U.S. metal band Chimaira's 'Spreading The Infection' Australian tour in January 2010. Double Dragon have stated they will spend the latter part of 2010 recording their second full length album, hoping for a release sometime later in the year.