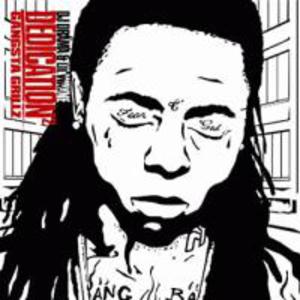 Atlanta-based DJ Drama and New Orleans resident Lil' Wayne (Dwayne Michael Carter, Jr) are the driving force behind the Dedication mixtapes that are a part Drama's "Gangsta Grillz" series. Their collaborations consist of remixed versions of popular songs along with lyrics and vocals provided by Wayne with his entourage and colleagues. Dedication 2 would prove to be one of the biggest landmarks in both of their careers.

Dedication 2 (Gangsta Grillz) released in 2006 with heavily crunked out remixes of popular hits courtesy of Drama and lyrics provided by Wayne along with a slew of many of other rappers. The mixtape featured many artists that were currently signed to Waynes label, Young Money. Among them were Curren$y, Remy Ma, Freeway, Willie The Kid, Detroit Red, Juice, Mack Maine, Pharrell and Juelz Santana delivering raw intensity with phenomenal flow. Assisting Drama with production were don cannon, DJ Green Lantern, DJ Infamous, Swizz Beatz, Pimp C, and many more. Tom Breihan of The Village Voice proclaimed it the best summer album of 2006, praising DJ Drama's "impeccable beat selection". "SportsCenter" was complimented for its "free associating brain bursts." "Georgia... Bush" was also acclaimed for its "mesmerizing indictment" of President Bush.

Following up in the Dedication series yet again, Drama and Wayne release Dedication 3 (Gangsta Grillz) in 2008. Although Dedication 3 was a major success, it failed to match that of its predecessors but did gain some attention. The mixtape has sold over 70,000 copies in the United States, despite being available for free download. Besides the interludes, a majority of the mixtape has Wayne using auto-tune. Wayne continued to promote his own artists on this album. Returning MC's consisted of Willie the Kid and Mack Maine along with newcomers like Drake and Nicki Minaj. Returning producers included Don Cannon and Pimp C. Production was also assisted by newcomers like Soulja Boy and David Banner.

While both Drama and Wayne have continued their own respective careers, it has been said that Dedication 4 is in the works.