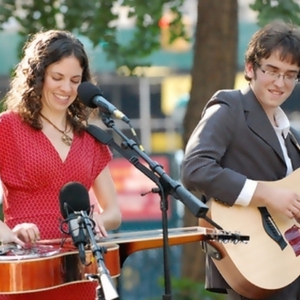 Abbie Gardner and Anthony da Costa are a folk music duo from Stony Point and Pleasantville, NY, respectively. With just a guitar and a dobro (with the occasional lap steel and/or lame joke) these two have been playing stages across the Northeast as a duo since July '07 where they made their (in)formal debut in the hills of the Falcon Ridge Folk Festival. Abbie (2006 Rocky Mtn. Folks Festival Finalist) regularly plays in the female Americana trio Red Molly, while Anthony (2007 Kerrville Folk Festival NEW FOLK Winner) usually tours and records as a solo act.

However, with their debut CD "Bad Nights/Better Days", due in April '08, the two have stepped out into the scene as a mean music machine. Raw and in real-time, there's nothing artificial about this duo (with Anthony's sudden extreme muscle development as a rare exception). They write the songs they used to be afraid to write. They sing with their hearts on their sleeves. Sit back and enjoy (or get up and start yelling and waving your arms or something, they'll know you're into it).