Derek And The Dominos 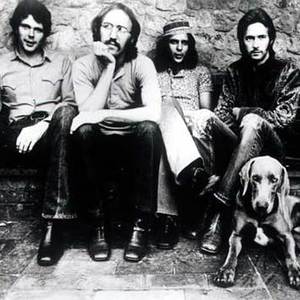 Derek and the Dominos was a music group formed in the spring of 1970 by guitarist and singer Eric Clapton along with Bobby Whitlock, Carl Radle and Jim Gordon, who had all played with him in Delaney & Bonnie & Friends. Duane Allman from The Allman Brothers Band joined the group early in the recording of their first album. They were a blues-rock band that demonstrated virtuosity at its finest, showing some of Eric "Slowhand" Clapton's finest work.

The group debuted at the Lyceum Theatre in London on June 14, 1970 where the announcer mispronounced their provisional name of Eric and the Dynamos to Derek and the Dominos, the band decided to take up the new name and undertook a summer tour of England. From late August to early October, working at Criteria Studios in Miami with legendary Atlantic Records producer Tom Dowd, the band recorded Layla and Other Assorted Love Songs, a brilliant double album now widely regarded as Clapton's masterpiece. Most of the material, including Layla (which soon became an FM radio staple) was inspired by Clapton's unrequited love for Pattie Boyd who was married to his best friend George Harrison. Clapton was seeing Pattie secretly at the time and Whitlock was dating her sister. It was not until much later that the affair was open; Boyd moved in with Clapton in 1974 and married him in 1979. However, they were separated in 1985 when Clapton started a relationship with Yvonne Khan Kelly and they divorced in 1988. The two-part song "Layla" was recorded in separate sessions; the opening guitar section was recorded first, with the second section following several months later. The second section was an elegiac piano piece composed and played by drummer Jim Gordon; early on, he objected to it being added onto Layla, but after some arguing among the band's members he finally agreed.

The Layla LP was actually recorded by a five-piece version of the group, thanks to the unforeseen inclusion of slide guitar virtuoso Duane Allman of The Allman Brothers Band. Clapton recorded most of the album while lying on the floor strung out on drugs. The band was heavily into drugs at this time, but, unlike many artists such as The Beatles, Clapton feels this did not hurt the recording process. A few days into the Layla sessions, Dowd, who was also producing the Allmans, invited Clapton to an Allman Brothers outdoor concert in Miami. The two guitarists who previously knew each other only by reputation, met backstage after the show, and then both bands repaired to the studio to jam (an impromptu session which, happily, was captured on tape). Clapton and Allman "fell in love" with each other's playing and became instant friends, so Allman was immediately invited to become the fifth member of The Dominos. (These studio jams were eventually released as part of the 3-CD 20th-anniversary edition of the album.)

When Allman and Clapton met, The Dominos had already recorded three tracks (I Looked Away, Bell Bottom Blues and Keep On Growing); Allman debuted on the fourth cut, Nobody Knows You When You're Down and Out, and contributed some of his most sublime slide-guitar playing to the remainder of the LP. The album was heavily blues-influenced and featured a winning combination of the twin guitars of Allman and Clapton, with Allman's incendiary slide-guitar a key ingredient of the sound. It showcased some of Clapton's strongest material to date, as well as arguably some of his best guitar playing, with Whitlock also contributing several superb numbers, and his powerful, soul-influenced voice.

Live at the Fillmore CD1

Live at the Fillmore CD2