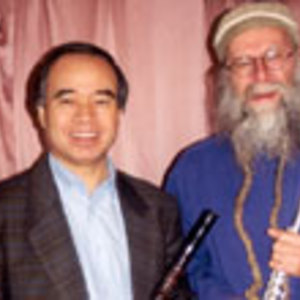 Biography In the '70s, Evenson and his wife Dudley traveled across the country with early portable video equipment to document "the awakening consciousness as it was manifesting in people's lives." The couple eventually settled in Tucson, AZ, and built a small empire with their Soundings of the Planet record company. Their stated purpose was to help people "experience the healing energies of music and natural sounds and get in touch with a more peaceful place inside themselves." Soundings of the Planet has had amazing success in creating and distributing recordings that communicate this goal.

Evenson produces many of the label's artists. He also has several albums of his own that combine natural sounds with his softly flowing flute melodies and various other acoustic and electronic instruments. ~

Tao of Healing is an "exquisite collaboration between sound healing pioneer Dean Evenson and Chinese gugin master Li Xiangting." (A gugin is a seven-stringed zither.) These like-minded spirits join their musical healing powers to create a joyous new age masterpiece. The atmospheres and sound design are largely acoustic. The very subtle synth adds an aura to the set. Evenson's flute goes to a higher plane and takes listeners along for the ride. Xiangting's zither is mesmerizing; it has qualities of a sitar with a much broader range. Scott Huckabay contributes a gentle guitar to the proceedings. This is great alternative minimalism from two musical wizards. It essential holistic new age music. This CD will appeal to fans of Steven Halpern, Lisa Lynne, Constance Demby, and Tingstad & Rumbel. ~