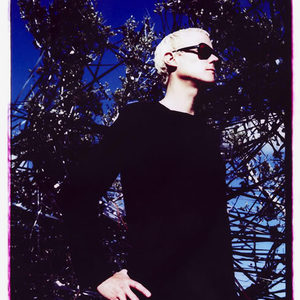 David J. Haskins (b. April 24, 1957, in Northampton, England) is a British alternative rock musician. He was the bassist for the seminal goth band Bauhaus. J wrote the lyrics of several Bauhaus songs (including their first single, Bela Lugosi's Dead. He sang backing vocals on many songs, and sang lead on Who Killed Mr. Moonlight? when the lead singer, Peter Murphy fell ill with pneumonia. He began writing music for a solo career while still in the band, and continued after the band's breakup, releasing the dark Etiquette Of Violence and Crocodile Tears And The Velvet Cosh...

In 1985, J, Daniel Ash, and J's brother Kevin Haskins formed Love And Rockets, in an attempt to reform Bauhaus, though vocalist Murphy abjectly refused to take part. J played bass guitar but also shared songwriting and vocal duties with guitarist Daniel Ash. His most notable lead vocal from this period was the minor hit No New Tale to Tell. J maintained his solo career during breaks from Love and Rockets, releasing Songs From Another Season and Urban Urbane after his band's success with the single So Alive. Love and Rockets broke up in 1998, after seven albums, and then J participated in a Bauhaus reunion almost immediately afterwards. Following what was billed as a one-off performance of the band at the 2005 Coachella concert festival, Bauhaus reformed for a successful tour of the Americas in late 2005 and Europe in early 2006.

In 2003, David J started working on the instrumental score for an independent film about Elizabeth Short directed by Ramzi Abed, which includes guest artists and singers like Dame Darcy, Julee Cruise, Abby Travis and Nora Keyes to name a few. He has also regularly shown his art in galleries across the globe, as well as been a resident DJ at numerous Hollywood hot-spots like The Standard Hotel and Knitting Factory.

Missive To An Angel From The Halls Of Infamy And Allure

An Eclipse Of Ships

On Glass: The Singles

Songs From Another Season

Crocodile Tears And The Velvet Cosh