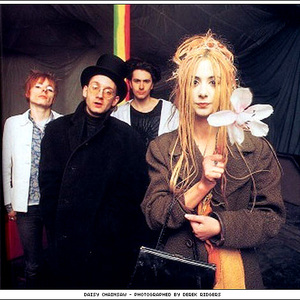 Daisy Chainsaw was an English noise rock band that formed in London in 1989. Their live gigs included vines and rag dolls strewn across the stage and KatieJane Garside thrashing around in soiled gowns drinking pineapple juice from a baby bottle. The band was very successful with their Love Sick Pleasure EP which included the hit "Love Your Money." - primarily due to prime time appearances on ITV's The Chart Show and Channel 4's The Word.

The band was very successful with their Love Sick Pleasure EP which included the hit "Love Your Money." - primarily due to prime time appearances on ITV's The Chart Show and Channel 4's The Word. However, they had to decline appearing on BBC TV's Top of the Pops because Garside had a throat infection. "Love Your Money" reached number 26 in the UK Singles Chart in February 1992. They turned down Top of the Pops and even an offer to be signed to Madonna's Maverick label, later signing to independent One Little Indian. One full album was released, Eleventeen, while KatieJane was still in the band. In 1993, just before leaving the band, KatieJane shaved her head and drilled baby doll heads onstage - the act was becoming more and more violent. She finally left the band for good that year and disappeared from the music industry.

After the departure of Garside, Daisy Chainsaw proceeded to make one more full length album titled For They Know Not What They Do with Belinda Leith on vocals, and one more EP titled You're Gruesome with Crispin replacing Leith before splitting for good in 1995. After the split of Daisy Chainsaw, a band named Dizzy Q Viper was formed, made up of previous Daisy Chainsaw members, Gray, Adams and Johnson. After Dizzy Q Viper, Vapid Dolly was created, and this band was made up Dizzy Q Viper members with the addition of Hanayo as lead vocals.