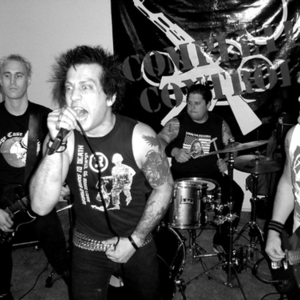 The band spent the early part of their career writing, touring and building a strong fan-base in Austin as well as other cities across the great state of Texas. These initial months proved to be fundamental for the band and were paramount in shaping their distinctive future sound.
The "Vicious Ones" single 7 inch released on Slab-O-Wax Records in Jan 2004 held the fans over until the band was picked up by TKO records later that year. The band delivered their first full length record "Reaction" in April 2004 with great acclaim and accolades. They promoted the debut full length with a 10 week North American tour supporting Long Beach legends Clit 45. Then in early 2007, they released a split EP titled "Death Can Wait" with the local heroes the Krum Bums then followed up with a full West Coast tour. They immediately started making a name for themselves by opening up for bands such as the Casualties, Rancid, Against me! and various other punk icons on the scene.

The musical progression recently unveiled on their up coming EP "The Mourning After" is sure to raise eyebrows, but this is the kind of situation the members of Complete Control look forward to.The band is still creating the strong, anthemic, rock and roll music they are notorious for but just with a new musical styling akin to the dancy punk anthems of the late 1990's.
There's no doubt the old fans will be more then satisfied with the bands progressing sound and as for the hipsters kids, they are sure to catch on as well.
Eat your heart out.
M. Mangold