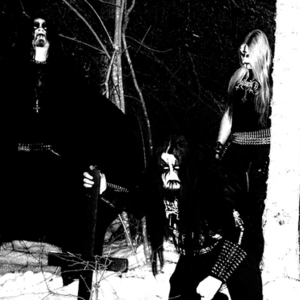 After the death of second millenium spawned to the world a bastard child CALVARIUM. Formed by Veilroth and Lord Sargofagian, two dark souls in search to create more sinister and suicidal Black Metal they had ever made before. Veilroth, ex-member of Alghazanth and current part of Behexen's legion, handled the malignant strings of blasphemy while Lord Sargofagian, leader of his band Baptism and also a member in Satanic Warmaster, Trotzreich, Valonsurma and Ymir, performed the ritual art of all percussions. Both of them manifested the vocal liturgies and screams of torture.

With this line-up they recorded the first rehearsal tape in Dungeons of Hate in October of 2001. The tape wasn't officially released. It featured too long tracks later to be recorded with different titles.

Second rehearsal tape was recorded in early 2002 with improved versions of old songs and new ones as well. At that time decision was made and Calvarium headed for studio. So in May 2002 they entered studio Lutakko with five completed songs and lyrics to be recorded and released as a promo/demotape. Change of plans occured when Calvarium was offered a record deal by Dynamic Arts Records. Five songs were ready along with a torturous intro; a twisted moment of insanity captured by the whole trio.

Despite the excellence of the tracks the five songs weren't enough to release them as a full-length. New recording session was necessary. But in August 2002, six hours before the recordings, studio Lutakko's equipments were burnt in electrical fire. It was time to book a new studio and this time Calvarium entered to legendary Studio Perkele. Three new tracks were recorded and all tracks were re-mixed. The result was Calvarium's first bastard child, "The Skull Of Golgotha"! Album has been released 21st of January 2003 via Dynamic Arts Records.