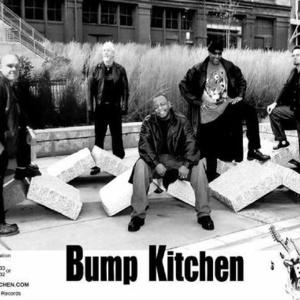 Bump Kitchen, a Tacoma, Wash., six-piece band that pumps out the hard-hitting funk and deliciously smooth soul, are known for their tight performances and inteteraction with the audience. Formed just over ten years ago by Everett James, Bump Kitchen was founded on the idea that there's still a place for real musicians playing funk and soul in the Pacific Northwest. Tony Harper's rich vocals are backed by powerful four-part harmony reminiscent of the Neville Brothers. Keyboards, guitar, bass, drums and saxophone combine to provide delectable, danceable funk

to an audience that's always begging for more!

The sophomore album Who Ordered the Waffle came in 2009 and showed off a funkier, more
soulful sound to the group. Howard Dukes of Soultracks.com recommended the album and
wrote, ?Casual fans might not care about hearing a band where the musicians demand equal
billing with the vocalist. And that's not because lead singer Tony Harper can't hold his own.
Nothing can be further from the truth. Harper has a raspy, throaty tenor voice that's perfectly in
sync with the high energy brand of rock infused funk that is Bump Kitchen's forte. These guys
have the skills, and they aren't ashamed to show it.?

Fast forward to 2011 for the release of Live at The Yale, which just hit the streets
in July,
Combining original songs from
Big Ol' Bones
and
Who Ordered the Waffle
along with a hot instrumental track, the world will finally get to carry around a portable version of
the funktastic, delectable live sound of Bump Kitchen. Bill Buckley of the UK's SoulandJazzandFunk.com says;
"They "do" funk with consummate ease but in TONY HARPER they possess a superbly soulful front man "

For more information on Bump Kitchen, visit?www.bumpkitchen.com. Already hungry for more?
Visit iTunes or cdbaby.com and pick up a copy of any of their albums right now.