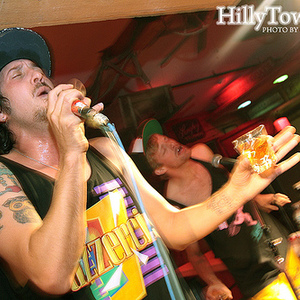 Calling Bleubird an MC doesn't feel complete. Storytellers draw from varied impulses, and Bleubird's vision is oddly utopian. He takes mere observations, gift-wraps them and re-presents them as spectacles. It's the type of satire that can only be born of a wide-eyed-yet-wary appreciation of modern day landscapes and the people who walk through them. He claims (somewhat disingenuously): ?I hide behind my humor because it's truth that I fear,? but even in his darkest humor he betrays himself.

He claims (somewhat disingenuously): ?I hide behind my humor because it's truth that I fear,? but even in his darkest humor he betrays himself. Those who listen can tell that even at his most caustically comical and sarcastically potty-mouthed, it's all for love.

From Florida to Montreal to Berlin, Bleubird has lived among many communities, and made himself a part of each one. These nomadic tendencies are telling. He is the message and the messenger - the transmission and the tower. At home in transit, travel is at the basis of his trade: it is constant evolution that defines Bleubird.

From humble beginnings in 1999 opening up for The Nature Kids at Liquid Cellar in Orlando, Florida (with his homie Tripone and a DJ named DIPLOdacus), he spent the next years playing and promoting shows in and around that city, building up the scene surrounded by comrades like Swamburger and DJ SPS. More recently Bleubird appeared in Urb's 2008 ?Next 100? list.

During his tenure in Montreal, he could be found rocking TurboCrunk parties with Subtitle and Megasoid. Alternatively, during that time he was a regular at Moondata Labprojects sessions, which featured a rotating cast of musicians such as Patrick Watson, members of Sevens Project, Norsola (God Speed you Black Emperor), DJ P-Love, and Stefan Schneider (Bell Orchestre).

After releasing a cd/lp and touring Europe and Japan as part of international rap conglomerate Gunporn, Bleubird was spotted sitting in with Leo Tardin (winner of the first Montreux Jazz Festival International Piano Solo Competition) at Montreux 2008, and for three shows in Mumbai. The same restlessness that had him touring through France with electro industrial rap superstars X-Makeena brought him to Amman, Jordan last year with Ramallah Underground (On july 4th no less!).

In case you haven't caught on, collaboration is a big part of Bleubird's motivation. He makes demented party music with Astronautalis as Boyfriends Incorporated, and teams up with Jayrope to deliver us well-focused chaos as Prinzenallee. For the comic and creepy Les Swashbuckling Napoleans, he hooks up with Thesis Sahib and Edison. In 2007, he and Scott Da Ros (Endemik Music label magnate and fellow artist) curated Mega Possee Cut, featuring 26 rappers from all over the world.

All along, Bleubird has kept a steady flow of his own recorded music. Since early self-releases, his partnership with Endemik music has brought us a few lp and cd master works: Sloppy Doctor in 2003, Pilgrim of St.Zotique in 2006, and RIP U$A (The Birdfleu) in 2007. If these official releases aren't enough, he tides fans over in the spaces between with his Street Talk series available for download from the artist himself. Clearly, the studio and the stage are just two sides of a coin.

On tour, he's equally comfortable sharing the stage with the likes of Deerhoof, Battles, Masta Ace, Fatlip, Amon Tobin, Kid Koala, Otto Von Schirach, De Bug, Dalek, Lightning Bolt, Anti Pop Consortium, or Xiu Xiu. He gives the same intense energy to a different show for each performance, whether it's a crowd of 20 accountants or 200 club kids. In Bleubird's world, professionalism has nothing to do with delivering the rote show ? it means getting the details out of the way so we can all get down to the real show. In his own words: ?I like to yell and sweat and move and say exactly what I think and feel. I understand that always changes.?