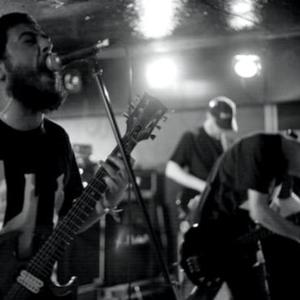 Black Sun as ?Black Sun Machine' was formed in Glasgow as a solo side project initially in the demise of the 20th Century by Russell McEwan. McEwan felt he had served his time with ?ber-rockers Macrocosmica and was feeling the need to explore his own songwriting capabilities after many years solely on the drums. McEwan was joined by Guitarist/Vocalist Kevin Hare of Glasgow stoners ?Lotus Lounge' around the embryonic stages of Black Sun's first album ?Fleshmarket,' released to critical acclaim on London's Over Records. ?Fleshmarket' was constructed from loops and samples of McEwan and Hare on an ancient Pentium P90 PC. Soon after the release of this album McEwan moved back to the live drum kit and Graeme Leggate joined the band on Bass guitar. Black Sun spent a long time in the practice room in order to perfect their sound for the live environment. They also began writing their second album. As Leggate became a bass player, Black Sun became a band. Another release (Circus of the Fallen) was followed by the full-time recruitment of Guitar player Kerr Robin. With a stable line-up, and Robin fully integrated into the band, Black Sun set about infecting the UK and Ireland with their particular brand of sonic filth. Consistent gigging in 2004/05 culminated in landing the support slot with Khanate at the Barfly, Glasgow in November 2005.The tracks for Sacred Eternal Eclipse were recorded on location at Berkeley 2 studios, Glasgow in November of 2004, and were mastered by none other than James Plotkin of OLD/Atomsmasher/Khanate fame. The Distortion Project picked up the band's signature in September 2005 and are proud to release this awesome behemoth of an album. This 8 track, 56 minute CD contains the blackest, filth-encrusted doom this side of the river Styx. Tracks like ?Vena Cava? and ?Airstrike? slowly grind along in a deeply satisfying fashion, whereas ?Red Rain? pummels the listener into submission with its relentlessly churning riff and violently anguished vocals. This is an album that bristles with malicious intent from start to finish. ?Sacred Eternal Eclipse? is tortured, doom-laden metal at its finest. However, as well as being a brutal album, ?Sacred Eternal Eclipse? also has some reflective and melancholic moments. Parts of ?Dumb show? highlight a more somber Black Sun, and this song is tinged with a profound sadness. All in all, this is genre defining stuff, and no self respecting fan of extreme doom should be without this very important CD.

The year was 1999. Three musicians that got to know each other through their friends, joined together to form a band that would reflect their particular bold influences such as Hammerfall, Helloween Megadeth and Metallica. Nicolas Estrada (Drums), Christopher Gruenberg (Lead/Rythm Guitar), and Xavier Diab (Lead/Rythm Guitar), started by playing cover tracks from their favorite bands.

The band was doing fine, by rehearsing in one of the member?s house. However it became obvious they were lacking a bass player. They begun to look in their social circle for someone to fill the spot, but no one with good bass playing skills was available. They decided to go another route. Which lead to a mutual friend who played guitar with very good musical knowledge and wanted to give it a try on the bass to fill up the band?s needs. He had more of an 80?s influence, however he was perfect to give the band what it was lacking. His name: Juan Miguel Iturralde.

So far, the band would do fine at a rehearsal room, but what about gigging? Good singers are hard to come by in this place, so the band had to rely on the vocalist from another band to start gigging. Jamil Chedraui from the Band Spectrum, helped in the process of the band maturity.

At this point, they were unknown, and It was the year 2001.
Some gigs came, some bad, some good and the band was getting solid. Still, there was the need for a formal and different kind of vocalist.

The search begun, and the good news is that they did find someone a little different from the rest of singers in the media, someone with a high pitched voice to compliment the mid filled guitars that the band was projecting? Chemel Neme was a former singer from the bands Sanctuary, Ciclopes en Silencio, with strong influences from the 80?s such as Iron Maiden, Stryper, Def Leppard.

As soon as they were together, the band took a real definition onto the musical direction it was going to take. Hence? Black Sun was born.

They had a couple of gigs with great acceptance from the audience, and they started composing their own music.

Sadly, one of the guitar players had to leave the country to pursue his educational goals in Chile. Xavier Diab left the band. He left a great hole to fill in the band. But instead of going for the regular way of finding another guitar player, Juan Miguel Iturralde went back to play guitars, and he was doing very good. A search for another bass player, to finally make the band a whole, started.

Luis Fernando Fabara, a well recognized and former bass player for several heavy metal bands, joined the band to insert his prog-metal influences and technical prowess to define what the low end of the band would sound like, so that the guitars could propel in the mid and high registers.


This move would define what Black Sun is about these days. An 80?s Hard Rocking band, with the ambience of modern techniques without incursing in the progmetal or un metal world, wich is in so much demand right now. They wanted to preserve the sound of their influences and put it in their own music.

By now, one of the first creations was recorded. Metal Madness would be their first single and with it the band would emerge from the underground, to become one of the best known Heavy Metal bands in Ecuador.

The acceptance of Metal Madness lead to recording the whole album. A full Indie product made with fundings from their members alone.

Black Sun is now promoting their first album, and starting to create their second, but hopefully with a greater production.

The first promo ?Metal Madness? was #1 at www.ecuarock.net for 8 Months, and was the most downloaded song on that site.
The second promo ?Last Survivors? was #3 at www.ecuarock.net for 4 months.
The track ?Tyrant from a Foreign Land? was ranked #1115 of 7000 songs worlwide earning prizes for: ?Best Guitar Melody?, ?Best soundtrack? , ?Best Bass Track?, ?Best Guitar Track?, ?Best Melody? at www.garageband.com
Band of the month on the UK?s page: www.raging-metal.com
Band of the month on the EC Page: www.elrondador.com

Very little information can be found on this band other than that they issued an LP on Festival some time in the 1970's called USA Visions. Cover and tracklist can be found here - http://wax.fm/release/black_sun_usa_visions/FLD+664/d/769324

Tyrant From A Foreign Land