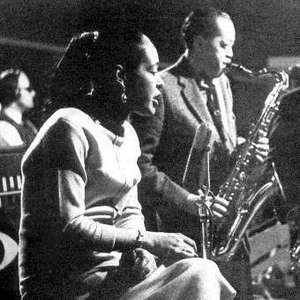 Lester Young and Billie Holiday were the Gram Parsons and Emmylou Harris of the jazz world. The music the two of them made together was so achingly beautiful and so perfectly in synch it seemed impossible that they were not lovers. As with Gram and Emmylou, the exact nature of their relationship remains somewhat enigmatic. Young was the one who gave the nickname "Lady Day" to Holiday and she in turn called him "Prez".

Since the late 1930s, the two had made incredible music together and spent a great deal of time around the other. But they had had some sort of rift, perhaps over Holiday's drug use, and had not spoken for years before the television special.

Prez, who had wrecked his body with alcohol, was in such ill health he couldn't stand for the duration of the six-minute song. Holiday launched into the song and each sax man took a turn. Gerry Mulligan was first and played a solo in double-time. Webster was next, blowing a beautiful, breathy chorus. And then it was time for Prez. When it was Young's turn he wearily stood up, and locked eyes with Holiday as she sang a song with lines like "Love is like a faucet / It turns off and on". As Lady Day sang, Prez hit every note exactly in time with her and they took off like two eagles riding an air current as they rose higher and higher, way out of that studio and those television sets, circling around each other, Prez blowing the notes that sustained her as if he was the body to her soul, and then they came together in mid-air, as mating eagles will, and plummeted hundreds of feet earthward together, before breaking off and flying their separate ways. People in the control booth had tears in their eyes. It was the swan song of a bittersweet affection. After the show, the two had some brief backstage conversation and then they bid goodbye. They each had less than two years to live. Prez would die alone in a New York hotel, his body finally calling it quits. Not long after that, Holiday would be arrested on her deathbed for heroin possession.