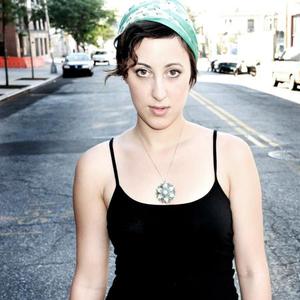 Brooklyn-based indie artist Bess Rogers has had a lifetime fascination with evolution. But it wasn't until 4 years of nonstop touring and three independent releases that the science of life began to creep its way into her songs. Her new record, aptly titled Out Of The Ocean, is a bold step forward for Rogers, and one that she has been eager to take. Raised in a musical family (her mother played harpsichords that her father built), Rogers has been living and breathing music since she was 6 years old.

Raised in a musical family (her mother played harpsichords that her father built), Rogers has been living and breathing music since she was 6 years old. After earning a bachelors and masters degree in music composition from SUNY Purchase, she began a steady routine of recording and touring in support of her own music and as a back up singer and lead guitarist for indie-pop artist, Ingrid Michaelson.

During a rare few months off this winter, she decided to hibernate in her Brooklyn home and write a new record. In between working on the songs, she picked up a book called "Your Inner Fish" by Neil Shubin. "The book is about our evolution from life as far back as pre-historic fish and microbes and how that has affected our bodies and our lives now. It really grabbed me and I found myself a bit obsessed. I started to look at everything we do in life as a product of evolution, and many of the songs on this record were inspired by that idea," says Rogers.

Produced by Chris Kuffner (Ingrid Michaelson's Girls and Boys) and recorded partly in a Maine farmhouse studio owned by Sam Kassirer (producer of Josh Ritter and Erin McEown) and partly in Rogers' home studio in Brooklyn, Out Of The Ocean features a host of talented friends including Ingrid Michaelson, Allie Moss, Ian Axel, Saul Simon-MacWilliams, Elliot Jacobson and Dave Eggar (Train, Beyonce). Like Rogers' live shows, the songs themselves have a huge dynamic range. From the haunting underwater mermaid ballad "In the Waves," to the synth-laden robot love song "Math and Science," to the driving pop-rock sing-along "Water and Dirt," Out Of The Ocean mirrors our understanding of life and love through time while maintaining a pop sensibility that Rogers is known for.

Like her previous releases, Bess Rogers Presents Bess Rogers (2010), Travel Back EP (2009) and Decisions Based On Information (2007), Out Of The Ocean was made and released independently. Knowing that this new record would require a more substantial budget, Rogers put out the call to her fans through Kickstarter. Within two days of launching the campaign, the initial goal of $10,000 was met; and by the end she had raised $26,000 with over 500 backers. "It was amazing." says Rogers. "The amount of support it got was mind-blowing and made me even more excited to make this record and get it out there into the world."

Bess' music has been featured on such television shows as One Tree Hill, Pretty Little Liars, Raising The Bar, and Switched At Birth, and a national Motts for Tots commercial. She has shared the stage with Ingrid Michaelson, Loudon Wainwright, Ari Hest, Ian Axel, Allie Moss and more. Out Of The Ocean was released on October 4, 2011, and was supported by a extensive tour in the US and the UK.

Decisions Based On Information