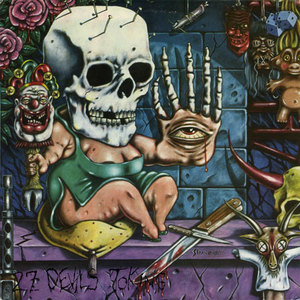 27 Devils Joking was a music group started in 1985 in Santa Fe, New Mexico by former Delinquents (an Austin punk band that recorded with Lester Bangs) member Brian Curley. Brian started out on bass and vocals, with Chip Holz on drums, and Jamie Bigelow on guitar. One of the few hardcore punk bands in New Mexico at the time, 27 Devils Joking played a seminal part in the New Mexico punk scene. Each release from them took the band in new directions, eventually being on the forefront of the grunge scene until their demise in 1993.

The band's first LP Actual Toons came in 1986. Recorded in Brian's home studio and released on Brian's own Live Wire Records, the record featured the band's original lineup. After the album's release, however, Bigelow left the band. Tim Gagan stepped into the lead guitar position, and his out-of-left-field playing and wild onstage antics earned him the nickname ?Gonzo?. Shortly thereafter Tim Stroh was brought in on bass, allowing Brian to move to second guitar. This lineup recorded Slonger in Tim Stroh's ever expanding Stepbridge Studio. Slonger was released in 1988, once again on Live Wire Records. While Actual Toons was a fast, hardcore punk album which featured guitar solos, uncommon in punk at the time, Slonger showed a toned-down, less heavy version of the band.

Once again the completion of a recording saw the departure of a band member. This time it was Chip Holz, who was replaced by Tommie Rae Archuleta. Tommie Rae's style was more aggressive, taking the band back to a harder punk sound. It was during this period that the band became an institution in Santa Fe, producing wildly successful live shows at Stepbridge Studio. The shows got too big for the studio, so they were moved into venues that were willing and able to do all ages shows. For these shows, Brian brought many touring acts to the area, including Nirvana's first couple of gigs in New Mexico at the Rockin' Teepee in Santa Fe.

Despite recording continually with the band throughout his stay in the band, Tommie Rae never appeared on any 27 Devils Joking releases. Bob ?Bobcat? Catron replaced Tommie Rae in 1989. Gonzo left shortly after that, to be replaced by Don Curry. This new line up made Smells Like Fun in 1989 on Dionysus Records. Tim Stroh also eventually left the band, with Tom Trusnovic replacing him on bass. For The Sucking Effect released by Rave Records in 1991, the band consisted of Curley and Trusnovic with Keith Herrera on drums and Michael Byers on guitar. By the time of Spreadin the Love Vibration in 1993 (on Sympathy for the Record Industry), the band was once again a trio, with Curley on guitar, Trusnovic on bass, and Bobcat back on drums.

In 1993 Brian returned to Austin, Texas with his family. After keeping the name 27 Devils Joking alive there for a while, he went onto to start other bands, including Los Soul Benders and Chiva Loca.