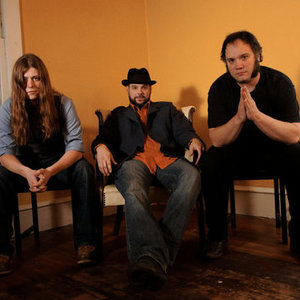 Backyard Tire Fire is an American trio that formed in Asheville, NC in 2001. The band began in the fall of that year with founding members Ed Anderson (vocals, guitars, keyboards) and Tim Kramp (drums, percussion). After encountering several line-up changes, the Tire Fire moved from Asheville to Athens, Georgia in 2002. They (along with then-bass player Warren Hawk) released their first album Live at the Georgia Theatre later that year.

After the release of their debut album, Backyard Tire Fire relocated once again to Bloomington, Illinois and added Anderson's brother Matt (bass, vocals) into the mix. The Anderson brothers had originally grown up in St. Charles, IL, Tim Kramp in Bloomington, IL and Ed Anderson received his masters in Interpersonal Communication from Illinois State University (located in Normal, IL, Bloomington's sister town). They recorded and released their first self-titled studio record in 2004 which was produced by Tony SanFilippo and recorded in analog at SanFilippo's Oxide Lounge in Bloomington, IL. This began the relationship between BTF and SanFilippo who produced and recorded their next three albums and 2 EPs.

2005 brought the release of Bar Room Semantics which was the first record to receive national recognition in the press from Harp Magazine and AllMusic.com. The band began touring heavily on a national scale in 2006 supporting artists like The Mother Hips, Will Hoge, North Mississippi Allstars as well as playing festivals like South by Southwest, High Sierra Music Festival in California, and 10,000 Lakes Festival in Minnesota.

Vagabonds and Hooligans was released February 6, 2007 and received a larger national spotlight with praise coming from USA Today, PopMatters.com and several influential bloggers including My Old Kentucky Blog and An Aquarium Drunkard. The band continued their heavy touring playing close to 150 shows that year with a diverse mix of bands including William Elliot Whitmore, Melissa Ferrick, JJ Grey & Mofro, Clutch, and Cracker. The supporting slots with Cracker brought them praise from Johnny Hickman who became an ardent supporter of the band saying, "My favorite band right now is Backyard Tire Fire and they sometimes remind me of early Wilco, Son Volt and Flaming Lips. And they unabashedly name check both Wayne Coyne and Tom Petty in song. They are my earworm the last few months.?

2008 found them signed to NYC-based label HYENA Records for the release of The Places We Lived on Aug. 26th 2008. The Places We Lived was a bit of a departure stylistically for the band as a portion of the record found the band focused on piano-based songs such as "Everybody's Down", "Rainy Day Don't Go Away" and "The Places We Lived". The record continued their national growth in the press as they were a Paste Magazine "Band of the Week" and received heavy airplay from nationally syndicated radio programs like Mountain Stage and Acoustic Cafe, Sirius/XM's Loft and XMU and non-commercial AAA radio stations like Louisville's WFPK, Asheville's WNCW, and Cincinnati's WNKU. They continued their heavy touring which found them on the road with old Athens friends Bloodkin, Lynyrd Skynryd's Simple Man Cruise, Reverend Horton Heat, Nashville Pussy, Ha Ha Tonka, Rose Hill Drive and a fortuitous opening slot for Los Lobos in the bands hometown of Bloomington. The opening slot introduced the band to Steve Berlin, who soon after signed on to produce their next record.

Good to Be, the bands fifth studio album, will be released on February 16, 2010 on the bands' Kelsey Street Records label, distributed by Thirty Tigers/Sony-Red. It was produced by Los Lobos' Steve Berlin and recorded on analog in Portland, OR's Type Foundry Studio. Prominent northwest engineer Jeff Stuart Saltzman recorded and mixed the record.

The Places We Lived