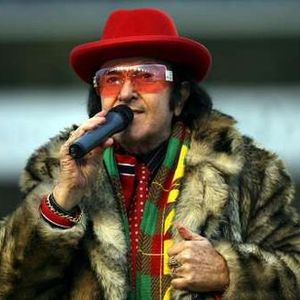 Eddy Wally (born July 12, 1932) is a singer from Ertvelde (Flanders, Belgium), and is the self-proclaimed "Voice Of Europe". He is most known for his songs "Ch?rie" and "Ik spring uit een vliegmachien" (I jump out of a djippelein), and usually wears flashy, shiny outfits, characterized by camp and kitsch reminiscent of Liberace. Eddy Wally's fanbase consists mostly of older people, but recently his popularity amongst youngsters has increased.

Eddy Wally's fanbase consists mostly of older people, but recently his popularity amongst youngsters has increased. It is, however, unknown if this is because they truly enjoy his music, or just find him funny. Eddy's frequent use of certain words such as 'Geweldig', 'Super', 'Onverstaanbaar', 'De beach gaat steeds maar door', and 'Beter dan in China amai' spawned a cult following among students.

He started as a salesman on markets selling handbags and became popular in the 1960s, after his association with Dutch producer Johnny Hoes. He even had his own disco "Ch?rie-Paris Las Vegas", first know as "Eddy Wally's Texas Bar".

Eddy Wally has a regular feature on the UK television programme Eurotrash.

Recently he started using new media to boost his career, by launching a completely new website; www.eddywally.be and using social media such as Twitter; http://twitter.com/#!/eddywallywauw